Former Officer Wanted in Connection With Double Murder in Irvine

Detectives are looking for a former LAPD officer, apparently disgruntled over his termination from the force, in connection with the double murder of a newly engaged couple last weekend, Irvine Police Chief David Maggard said Wednesday evening.

Maggard said that Christopher Jordan Dorner implicated himself in a "multi-page manifesto" that was published online but has since been taken down. A source inside LAPD gave NBC4 the manifesto, which is about 11,300 words long and appears to lay out a plan for targeting those involved in his firing.

In the manifesto -- addressed to "America" and titled "Last Resort" -- Dorner writes that the "horrendous murders" are "a necessary evil." 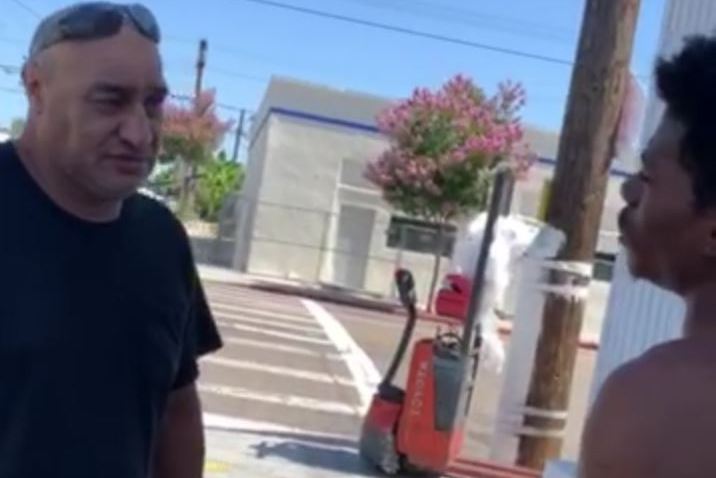 "I know I will be villified (sic) by the LAPD and the media," he writes. "Unfortunately, this is a necessary evil that I do not enjoy but must partake and complete for substantial change to occur within the LAPD and reclaim my name."

Dorner goes on to say, "There will be an element of surprise where you work, live, eat, and sleep."

Authorities asked for the public's help in finding Dorner, whose last known address is 4931 Sharon Dr. in La Palma. Dorner is described as 6 feet tall, about 270 pounds with black hair and brown eyes.

He may be driving a blue 2005 Nissan Titan pickup truck with California license plate 7X03191, and is "likely armed and dangerous," Maggard said.

A resident in the La Palma neighborhood where Doran lived told NBC4 that police advised her to "stay inside or leave the neighborhood." Sgt. Paul Morales with La Palma police said the agency is beefing up patrols in the area.

Pictured below in a photo from a 2006 LAPD newsletter, Dorner was on the force until 2009 and was a reservist in the U.S. Navy, according to Maggard.

In a statement released late Wednesday, LAPD said it is "implementing all measures possible" to protect the department's personnel and their families, some of whom were threatened in Doran's manifesto. LAPD said Dorner was employed as a police officer from Feb. 7, 2002, until Sept. 4, 2008.

Monica Quan, 28, and her fiancé, Keith Lawrence, 27, were fatally shot Sunday while sitting in their car on the top level of a parking structure in the 2100 block of Scholarship Drive, according to Irvine police.

Quan's father was the first Asian-American to become an LAPD captain, and also worked on the Asian Gang Task Force.

In his manifesto, Dorner repeatedly refers to a Randy Quan as being involved in his firing.

"I never had the opportunity to have a family of my own, I'm terminating yours. Quan, ..., and BOR members Look your wives/husbands and surviving children directly in the face and tell them the truth as to why your children are dead," the manifesto read, in part.

Quan and Lawrence died from multiple gunshot wounds, according to autopsy results released Wednesday. Before the release of the autopsies, it was not reported that the victims were each shot multiple times.

The recently engaged couple was last seen in Winnetka at a Super Bowl party, and lived in the apartment complex attached to the parking garage. The couple left the party about 7 p.m. and were found slumped over in their car about 9 p.m.

Officials would not say where on their bodies the pair was hit.

Quan worked for two years as assistant basketball coach at Cal State Fullerton. Her team will observe a moment of silence Saturday when CSU Fullerton is set to take on UC Riverside.

Dorner's identification and the autopsy results come a day after family and friends pleaded for the public's help in finding whoever is responsible for the fatal shootings.

Anyone with information can call Irvine Police at 949-724-7192. Police said if anyone sees Dorner, they should not approach him and immediately call 911.