Three North County men who were lost in the San Bernardino Mountains huddled to survive freezing temperatures and wrapped themselves in a banner bearing the message "Jesus Is Lord."

A San Bernardino County sheriff's helicopter crew found the men at about 10:15 a.m. Tuesday in the North Fork Meadows area, at an elevation of more than 6,000 feet. 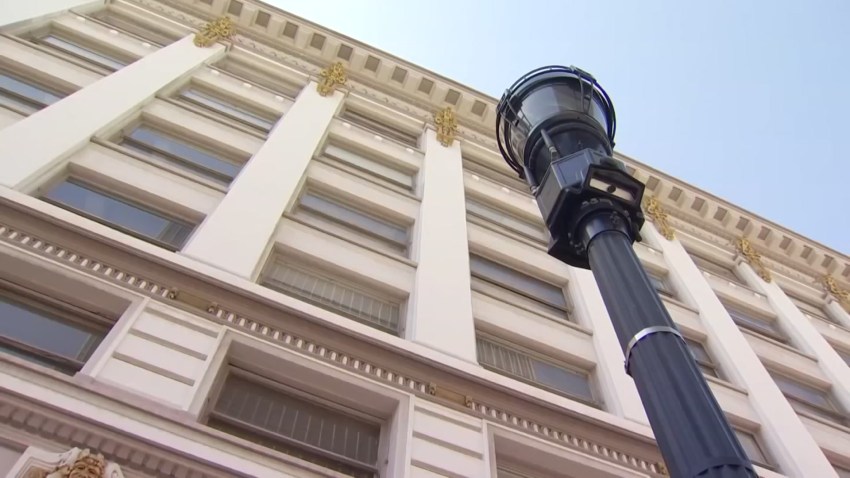 Deputies said the men appear to be in good condition despite their exposure to an area with rain, some snow flurries and temperatures in the 20s.

Ryan Shankles and Miguel De La Torre of Oceanside and David Yoder of Carlsbad used a banner they were carrying and huddled together for three cold nights to keep warm. On the banner, the message: "Jesus Is Lord."

"We spooned," said Yoder with a laugh. "Then we finally got a fire started, that that's what got us here today."

"We don't like to use the word 'spooning,'" said Shankles as the hikers spoke with reporters Tuesday.

They set off Saturday around 9 a.m. to hike to the San Gorgonio Peak with a fourth member of the group, James Goins.

About 90 minutes into the hike along Fish Creek Trail to the highest peak in Southern California, Goins began suffering from blurred vision and decided to return to the Heart Bar campground.

When the three others didn’t return by Sunday, he reported them missing.

The men, dressed in shorts and T-shirts, faced chilling temperatures in the 30's Monday night with the chance of snow.

The men went below a crevice in an effort to return to the trailhead, but wound up losing their direction.

"We just weren't sure," said Shankles. "We tried to go back to the original trailhead."

"He keeps a lot in the backpack, a mylar blanket and flashlights and rations, like that weird astronaut food," Jill Shankles said of her husband.

Jill Shankles spent Monday at Grace Chapel of the Coast Church in Oceanside where all four hikers are members.

"If I step outside of praying and being faithful, I'll get crazy and sad," she said.

The hikers told NBC 7 on Wednesday that they relied on their faith to stay alive.

"That was the number one thing - whenever we were up against something as a group we just stopped and said ok we need to pray on this," said Shankles.

Shankles also said they used every resource to take care of their basic needs. Each hiker had a camelpack with 2 liters of water and enough snacks for a day and a half, in addition to a small first aid kit and a Swiss army knife.

Shankles and Sebastian De La Torre, Miguel's son, rushed to the Heartbar Campground to reunite with the hikers.

It was there that they revealed the banner they carry with them on their hikes (seen right on an earlier trip) was used to survive the cold.

Over three days, dozens of search team combed the region on foot, horseback and from the air.

San Gorgonio is the highest peak between the Sierra Nevada mountain range and the Mexico border located about 27 miles east of San Bernardino.