One person is dead and eight others were hospitalized after a failed human smuggling attempt resulted in several people jumping off the panga they were in and into waters off La Jolla shores Thursday morning, according to the San Diego Fire-Rescue Lifeguard Division.

At least 16 people were on the vessel when it was first spotted and dropped off several passengers in three locations: off the waters of Marine Beach, a bit more north, up Coast Boulevard and a third undisclosed area where some individuals were able to make it to shore. 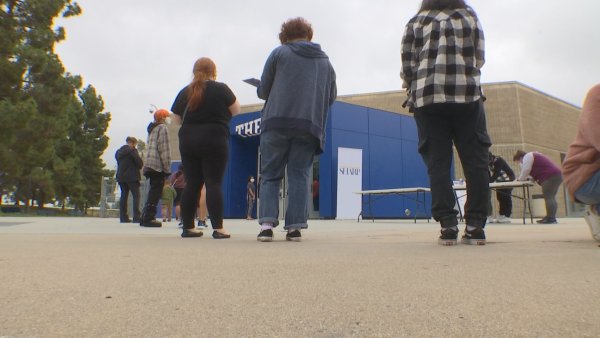 Face Masks in San Diego: What Are the Rules, Right Now?

SkyRanger 7 flew over the scene on May 20, 2021, where officials rescued several people from the waters off La Jolla in a suspected human smuggling attempt.

“In La Jolla off Marine Street, where agents first encountered the vessel, there were several subjects in the water in distress," U.S. Border Patrol Agent Jacob Macisaac said in a press conference.

SDFD said lifeguards deployed from Lifeguard Headquarters and from the San Diego Fire-Rescue Department's Station 13 rescued 10 people in what was described as "rough water conditions."

Some of those individuals had life vests on while others were seen holding onto one. All 10 of those people were brought aboard a rescue boat before they were transported back to shore. After being evaluated, eight people were taken to four nearby hospitals.

Five other people, who were not among the group of 10 rescued by authorities, managed to make it to shore on their own, according to San Diego lifeguards.

The panga continued to travel near the 700 block of Coast Boulevard and eventually crashed onto an area known as Wipeout Beach, SDFD said. One person was found submerged in this area. Despite lifesaving efforts, that person died at the scene.

“All individuals were determined to be unlawfully present inside the United States and were transported to a border patrol station for processing," Macisaac said.

NBC 7’s SkyRanger helicopter was over the scene where a rescue boat was spotted pulling people out of the water sometime before 6:30 a.m. Nearly a dozen emergency vehicles, including immigration authorities, were parked on a street near the shoreline awaiting the arrival of the rescue boat.

This is the third such suspected smuggling incident in San Diego waters this month – the second just this week alone.

This past Monday, the U.S. Coast Guard pulled 23 people from a panga off the coast of Point Loma after the boat got itself stuck in the surf line. The people aboard that panga were in the U.S. illegally, officials confirmed.

NBC 7's Audra Stafford is live in La Jolla where many people were pulled from the water Thursday morning near Windansea Beach during a suspect human smuggling event -- something all too familiar in San Diego this month.

On May 2, three people died and 29 (including the captain) were rescued from the choppy waters when a packed boat used in a suspected human smuggling attempt capsized and broke apart in the surf.

“It’s definitely something that we’ve seen an increase of over the past couple of fiscal years," Macisaac said. "Last fiscal year was actually a record year for maritime apprehensions with 1,273 apprehensions in the maritime environment. This fiscal year, which won’t end until the end of September, we’re already approaching 1,100 so we’re on pace to break that record again.”