Aaron Russell, 24, is charged in the May 1, 2020, death of Nicholas Bils, who was shot multiple times as he was running away from officers, leading to the rare decision to prosecute a law enforcement officer in an officer-involved shooting.

Following two days of testimony, which included accounts from several people who witnessed Bils' flight and the shooting, San Diego Superior Court Judge Theodore Weathers ruled there was enough evidence to proceed to trial, denying a defense request to dismiss the murder count or reduce it to voluntary manslaughter. 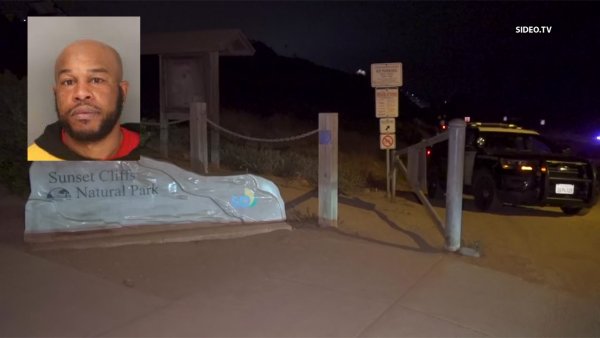 Bils, 36, was being taken to the downtown detention facility when he managed to partially slip out of handcuffs and escape from a California State Parks officer's car.

According to witness testimony and surveillance footage, another ranger in a separate vehicle tried to get out of his truck to subdue Bils, but he shoved the truck's door into the officer's legs and took off running before he was shot multiple times in the back, arm and thigh.

Nicholas Bils was running away when a sheriff's deputy shot and killed him last week, reports NBC Investigates' Alexis Rivas.

Three other law enforcement officers were at the scene, but Russell was the only one to draw his firearm, according to prosecutors.

Russell, who had been with the department for 18 months, resigned shortly after the shooting. He remains out of custody and his next court date is a Feb. 10 Superior Court arraignment.

While what prompted Russell to open fire remains unclear, one of his attorneys, Richard Pinckard, argued his client had a reasonable belief that Bils presented a threat to members of the public.

Though Bils wasn't carrying any weapons, Pinckard noted he had managed to slip the cuffs off one of his wrists and may have been clutching the dangling cuff in his hand as he ran from the scene.

Pinckard said that while Bils ran, he briefly turned toward Russell with the metal object in his hand and “Mr. Russell perceived an imminent threat.”

Deputy District Attorney Stephen Marquardt said the shooting was unjustified, both when considering self-defense or a recently updated standard for law enforcement officers' use of deadly force. State law now holds that officers can utilize deadly force only when they believe it's necessary to defend against the imminent threat of death or serious harm to themselves or others.

Marquardt highlighted the testimony of three other law enforcement officers present during the shooting, none of whom stated they perceived Bils as an immediate danger to others or felt they needed to draw their firearms to subdue him.

Darrell Ross, another sheriff's deputy who was walking with Russell to work that day, testified Tuesday that he saw when he saw Bils take off running, he “wanted to catch up with (Bils) and tackle him,” but “saw no need for any type of other force.”

Ross testified that he did not hear Russell or Bils say anything before the shots were fired, though he conceded that he briefly looked down to the ground at the moment when the shots were fired. Pinckard highlighted that point, saying none of the other officers shared Russell's vantage point of the suspect and the apparent threat he presented.

State Parks Ranger Jessica Murany testified that after arresting Bils earlier that day, she took him to the jail.

Once there, she said she heard the sounds of “fumbling” from the back seat and turned to see Bils with his back to her. She testified he never made any verbal or physical threats to her prior to fleeing, and did not have any weapons on him at the time.

Murany testified that she did not see the shooting, but heard the shots as she was radioing that she was engaged in a foot pursuit.

Jonathan Irwin, the park ranger in the other vehicle, testified that after Bils shoved the car door into his legs, he wanted to chase after Bils and “physically tackle” him. Irwin said he also didn't hear commands given before
the shots were fired.

When asked why he didn't draw his gun, he said he “did not perceive Mr. Bils as any direct threat to me” other than shutting the car door on him.

Bils was initially arrested about 4 p.m. May 1, 2020, at Old Town State Park, where he was hitting golf balls for his dog to fetch, according to a wrongful death lawsuit filed last month by Bils’ mother, Kathleen Bils, against Russell, San Diego County Sheriff Bill Gore, the park rangers who arrested Bils and San Diego County.

Murany testified that when she approached Bils because he had his dog off a leash, he ran from her and at some point brandished the golf club as though he might swing at her.

According to Kathleen Bils' lawsuit, her son suffered from longstanding mental health issues and was terrified of police, which may have played a role in his flight.