23 years ago Rose Hooper and her husband built their home in Jamul. Several years ago, he died of pancreatic cancer. On Thursday, the home they built together was destroyed by flames.

Hooper was staying at her cousin’s house when she got a frantic call. Her home was on fire.

The fire broke out around 8 a.m. at the home on the Skyline Truck Trail near Lawson Valley Road. Cal Fire officials say the fire started in the attic and then spread to the rest of the home, causing the roof to collapse.

“I’m still in shock.  I don’t know what to say,” said Hooper. “It’s not easy, but we’re thankful no one was hurt. Everybody’s healthy, our dogs got out ok.”

Hooper doesn’t know how the fire started. Her son had spent the night at the house after coming home at 2 a.m. from a fishing trip, but then left at 7 a.m. to go to work, Hooper said.

Firefighters worked to salvage what they could.

“They saved all my family photos and lots of personal items, a lot of important papers. We’ve had fires in the area before, so I was kind of prepared to grab and go, and told them where it was and they grabbed everything, all of our pictures are sound,” she said. 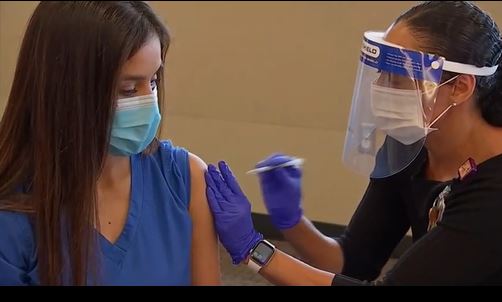 The location of the fire presented quite a challenge for firefighters. The nearest fire hydrant was about three miles away. Cal Fire called in a water tanker from the County of San Diego.

CHP issued a sig alert for Lawson Valley Road, which was expected to be closed for several hours.

The cause of the fire is still under investigation. No injuries have been reported.