A thunderstorm that soaked San Diego County on Friday blew down trees, flooded roadways, possibly sparked a brush fire, and even delayed the Padres game.

Click here for more details on the storm, including a forecast for the rest of the weekend.

Just before 4 p.m., the Heartland Fire Department was called to a home on Panorama Drive in La Mesa that had been damaged by a large fallen tree.

The tree, a Monkey Puzzle Pine that stood about 70 feet tall, fell across a road and its top landed on a neighbor's garage, HFD spokesperson Andy McKellar said. Crews said branches of the tree penetrated the roof of the garage. A resident was home at the time but was not injured.

NBC 7's Dave Summers reports from La Mesa where a tree fell and damaged at least two homes, and dragged down a power line.

On its way down, the tree snagged a power line that stretched across the road. A San Diego Gas & Electric crew responded and was seen tending to the power lines and chopping the tree into pieces.

A second home also sustained minor damage and its residents were sheltering in place. 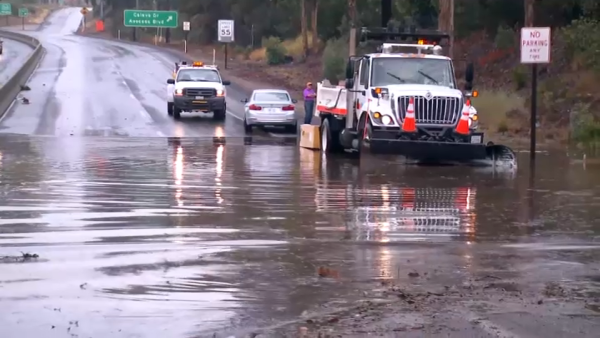 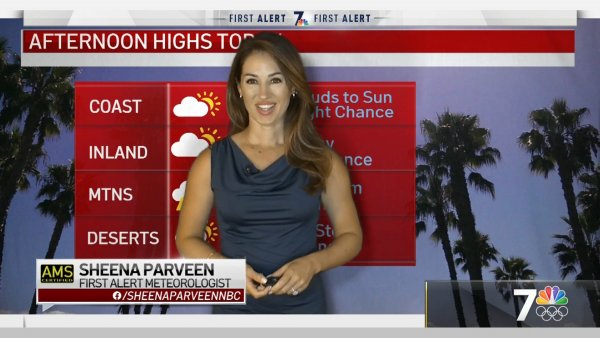 Traffic is a slow go westbound on SR-94 at Via Mercado, with all lanes closed due to flooding. NBC 7's Catherine Garcia reports.

Earlier in Spring Valley, a driver attempted to drive through standing floodwater along State Route 94 near Via Mercado and got stuck, the San Diego County Sheriff's Department said.

A tow truck came to the scene and hooked the disabled car to its wench and dragged it out of the pool. Caltrans said all lanes of the highway at Via Mercado were closed until the flooding could be cleared.

At around 2:30 p.m., the Cleveland National Forest Fire Department (CNFFD) raced to Mount Laguna to extinguish a fire reportedly sparked by a lightning strike. The department has staff that monitors lightning strikes, and when they catch one they can send crews to the area to see if there is a fire or any other damage, according to department spokesperson Nathan Judy.

As of 3:30 p.m., the department was still trying to reach the remote area of the strike. In some cases, after skies clear, aircraft are flown over remote areas to assess the damage, Judy said.

Meteorologist Dagmar Midcap has your First Alert Forecast for Sept. 24, 2021.

Who's on first? What's on second? Rain's on third.

A lot of cool stuff happens on the grounds of Petco Park, especially with the Padres in the heat of a playoff race. What the ballyard hardly ever sees is rain, let alone enough to delay or cancel a ballgame.

Yet, here we are.

The Padres had a unique double-header scheduled Friday with the Atlanta Braves in town. Earlier this season, the two teams had a game in Atlanta that was suspended by rain. The rain never let up before it was time for the Friars to skip town, so the MLB scheduled a make-up game of sorts. The game was to be resumed where it left off -- with the Padres up 5 to 4 in the 5th inning -- but in San Diego with the Padres playing as the road team.

Crazy, right? A similar situation happened during last year's truncated season. A game in San Diego against the Giants was canceled because of a COVID-19 exposure, so they made the game up later in San Francisco. The Padres ended up walking off the Giants in the bottom of the 9th inning in their own ballpark.

Friday's make-up game at Petco park was scheduled to start at 5:15 p.m., but the rain delayed that by about an hour. Game 2, with the Padres as the home team this time, is supposed to start 35 minutes after the conclusion of Game 1.