More than 850 firefighting personnel battling the Valley Fire continued to benefit from tamed weather conditions that allowed them to maintain the upper-hand on the 17,665-acre blaze.

Fire crews were able to keep the fire from growing since Cal Fire's Thursday morning size estimate, and containment improved to 35%, the agency said at around 6:30 p.m.

"Crews are focused on constructing and strengthening hand and dozer lines and are focused on mopping up and providing defense to structures that remain threatened," Cal Fire said.

The agency said it expected calmer winds and less severe humidity to limit fire behavior overnight Thursday, but the threat of dry, warm weather will remain a factor throughout the rest of the firefight.

"A high-pressure system will slowly build over Southern California through the weekend and will be accompanied by gradually warming temperatures," Cal Fire said.

The agency credited strong air support and fire retardant laid down Wednesday with allowing crews to keep the fire from pushing into more populated areas to the west overnight and into Thursday morning.

On Wednesday, a day when Santa Ana winds were anticipated to fuel the wildfire, crews kept the blaze from spreading more than 100 acres throughout the afternoon.

On Wednesday, the San Diego County Sheriff's Department allowed residents from the Corte Madera Ranch and Barrett Dam communities to return home with proof of residence, though the areas remained in an evacuation warning zone.

Areas accessible by Lawson Valley Road to the east (with the exception of Forest Park Road), and the north side of Japatul Road between Syquan Truck Trail and Hidden Glen Road were also reopened. Other evacuation orders remained intact.

The ongoing red flag alert is posing a threat against the Valley Fire firefight. NBC 7’s Audra Stafford shares what locals can do to prevent further dangers.

Some, unfortunately, would not have homes to return to. At last estimate, Cal Fire said 30 homes and 31 outbuildings had been lost, and another 11 had been damaged by the fast-moving fire.

Jamul residents Anabel and Dewey Bratcher were among them, but it was the sentimental items that were lost -- their son's urn and five cats -- that were much more valuable.

But the family is hopeful that they will be able to rebuild.

“It happened, OK. Damn it. I’m a Navy chief and it’s time to go to work and we’re going to rebuild and do whatever we can to go back to normalcy,” Dewey Bratcher said.

Another couple credited a defensible space for burning everything surrounding their house -- except their home.

“The fire came from the east and over this ridge toward the house, but because of the defensible space and the sprinkler system that surrounded the home, the house was saved. Still, some of what was lost can't be replaced," said Gareth Joseph, who built most of the home himself.

But what was consistent from people devastated by the wildfire -- from both the Bratchers and the Josephs -- was one thing: the generosity from the community will help them get through it.

“Our son already had some friends give him a bike, and the same with my daughter, so definitely some guardian angels and living angels looking out for us,” Joseph said. 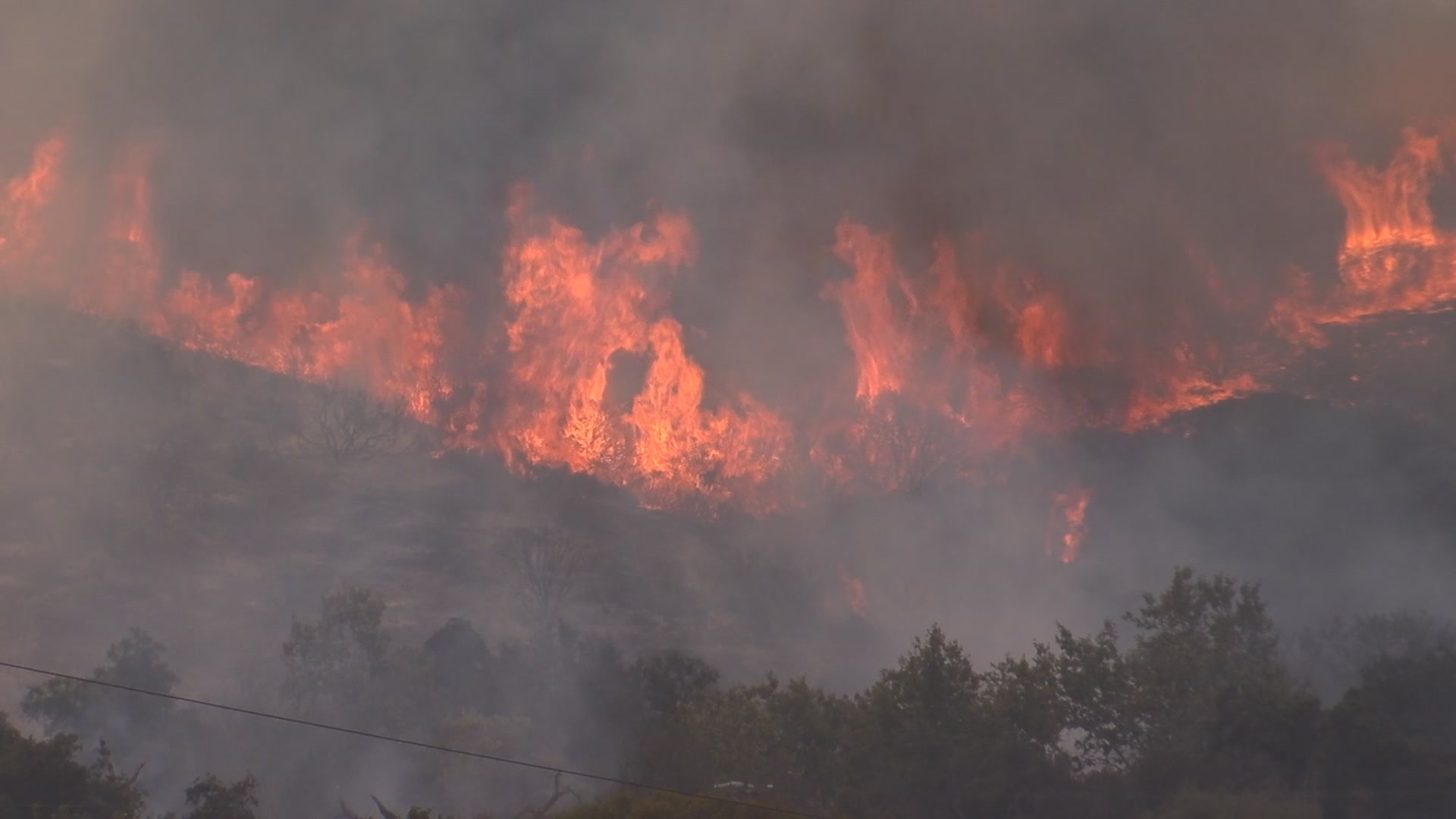 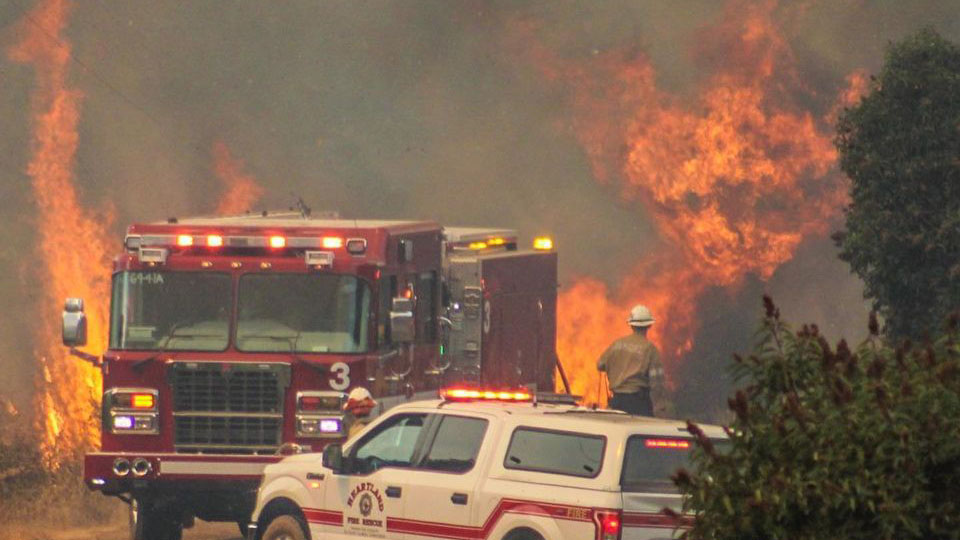 The Valley Fire has raged through the Japatul Valley area near Alpine since Saturday afternoon when it sparked in vegetation at Spirit Trail and Japatul Valley Road during a heat wave that swept the region on Labor Day weekend.

The wildfire has scorched the equivalent of 27 acres and, at one point, forced as many as 1,420 residents to evacuate. The cause of the blaze was not known.

By Monday morning, it had exploded to more than 10,000 acres as Cal Fire described its pace as a "critical/dangerous rate of speed." That same day the blaze grew to 17,000-plus acres, but crews have mostly halted its spread since.

Two people were injured but it was not known if those hurt were residents or firefighters, or how severe the injuries were.

Firefighting efforts continue to increase and on Wednesday night included a response from eight air tankers, 14 helicopters, more than 110 ground engines and water tenders, and the support of military aircraft. Nearly 900 personnel on both the ground and by air have responded to the massive blaze.

San Diego County has established a local assistance resource center for victims of the Valley Fire. The goal is to provide a one-stop-shop for everything that those affected by the wildfire may need -- from the American Red Cross to the California Dept. of Insurance.

Those with family members with additional needs, such as senior citizens or special needs individuals, should not wait for an evacuation order but should leave when a warning is issued for their community.

"Remember, you don’t have to wait, to be told to evacuate. You're the best judge, if you feel like you're in danger, take up your personal goods, your family members and let's not forget our pets, and evacuate," Gore said.

With the Valley Fire continuing to ravage through the East County, evacuations forced families and their pets out of their homes.

SDSO Lt. Anthony O'Boyle said several evacuation orders were being lifted but for those that remained in effect, people should know the threat from the wildfire is not gone yet.

"Just because you don’t see smoke or flames doesn’t mean there aren’t hazards in there," O'Boyle said. "And there are – downed power lines, gas leaks, unstable boulders and hot spots – so, please stay out of those areas.”

For the orders that have been downgraded to evacuation warnings, the lieutenant said residents should be ready if the fire pattern changes and they're ordered to evacuate once more.

As of Thursday, the following evacuation orders and warnings were in effect:

The Bratcher family was one of the 20 who lost their home in the devastating Valley Fire, but what may be worse is the mementos lost inside. NBC 7's Melissa Adan shares their story.

A temporary site at Joan MacQueen Middle School in Alpine, at 2001 Tavern Rd., was at max capacity as of Tuesday evening.

Authorities said family pets are welcomed at the evacuation centers. All evacuation updates tied to the Valley Fire can be found here.

The Jamul-Dulzura Unified School District canceled classes for the rest of the week due to the wildfire, the San Diego County Office of Education said. Students affected would be notified of the cancelation by phone, social media and on the district's website, and through messages in Google Classroom.

An evacuation site at the Lakeside Rodeo Grounds was closed on Thursday but large animals could still be sheltered at the Bonita location.

Anyone wishing to reclaim evacuated pets from the Bonita shelter should call 619) 767-2375 first to make an appointment. The staff will be able to have animals ready that way.
Meanwhile, the Iron Oak Canyon Ranch at 12310 Campo Road in Spring Valley is still accepting large animals but is nearing capacity.

Some roads are open to residents only. To get into these areas, you must show an ID with a proof of residency.

Find tips on how to safely return home after a wildfire at sdcountyrecovery.com.

As of 5:15 p.m. Wednesday, some 1,300 customers in parts of the fire zone were without power. This included about 1,100 customers across Dulzura, Dehesa, Alpine, Lyons Valley, Barrett Lake, and Rancho Palo Verde, where San Diego Gas & Electric said the fire had damaged equipment.

Some customers in the west Descanso, Viejas, and Boulder Creek areas, had their power shut off overnight due to "unsafe conditions in the area," but power has since been restored.

The latest power outages and restoration times can be found on SDG&E's outage map here.

The original outage as the Valley Fire began Saturday affected more than 12,000 customers.

In advance of the Santa Ana wind event expected to peak Wednesday, SDG&E notified more than 16,000 backcountry residents of possible public safety power shutoffs (PSPS) that could last through Thursday. PSPS's are a last resort for the utility when trying to reduce fire risk during weather events.

The PSPS warning went out to customers via phone call, text, and email messages, according to SDG&E. As of Wednesday morning, all 49 customers affected by the forced shutoffs had their power restored.