With the four new residents, the Ramona Wildlife Center is now caring for a total of six bear cubs

On Aug. 31, a 7-month-old cub approached firefighters battling the massive Dixie Fire in the Plumas National Forest, according to SDHS. The lonesome cub had minor burns to its paws and had been hungry for some time before authorities came to its rescue. 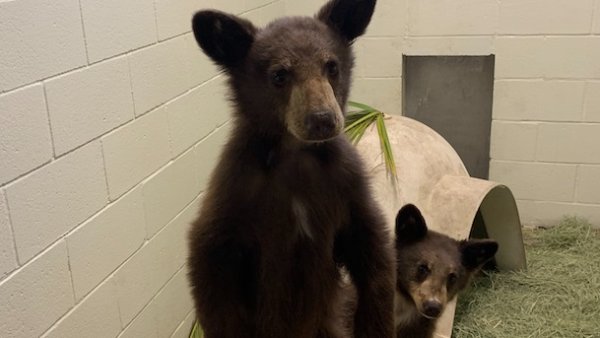 After being treated for its injuries by the California Department of Fish and Wildlife (CDFW), the bear was then transferred to the Ramona Wildlife Center on Sept. 10, where he’s been taken care of. Along with getting proper nutrition and a safe shelter, the cub has been getting to know three peers who also recently arrived in SDHS’ care.

Triplet cubs arrived at the Ramona Wildlife Center on Sept. 22 after they were found alone in Mariposa County by CDFW. A female bear was found killed not too far from where the siblings were, and the Performing Animal Welfare Society (PAWS) in Calaveras County agreed to care for them until they were transferred to San Diego County.

All cubs have been in quarantine indoors since their arrival. Once that period is over, they’ll be moved to a larger, outdoor enclosure in an enriching environment they’ll be able to use to hone their natural skills. Eventually, once all the cubs are strong enough, they’ll be released back into the wild.

We've been showing you how bears are taking advantage of empty homes, evacuated by owners in the path of wildfires. Now those residents, especially in the Lake Tahoe area, are warned to be very careful as they approach their homes, because bears could still be inside.

The four bears join two orphaned cubs that arrived at the Ramona Wildlife Center in August after they were spotted alone near the Sequoia National Park. They have since been under SDHS’ Project Wildlife care.

“We are incredibly proud to be a part of the rehabilitation efforts of six orphaned bear cubs at the Ramona Wildlife Center,” Christine Barton, director of operations & wildlife rehabilitation of the Ramona campus, said in a statement. “This year has been extremely hard on our wildlife as wildfires continue to devastate our forests and the areas that bears and other animals call home. I think more of us will be called on to help provide a safe haven for these displaced animals as we face these challenging times together.”