That's what Samual Valdez' mother told NBC 7 about the man who shot her son and his girlfriend as they put away their groceries at a Chula Vista Costco last week.

Family members are keeping watch around the clock at the hospital and they say Perez is doing remarkably well. She is walking and talking already.

Her boyfriend Samuel Valdez is making smaller strides. He is breathing on his own but has a long way to full recovery.

The face of gunman Sean Illian, seen in a mug shot taken five years ago at Riverside County Jail, is the face Frances Valdez says her son now sees in his nightmares.

“That's my first child. It's shocking. I wanted to cry but I tried not to," Frances said. 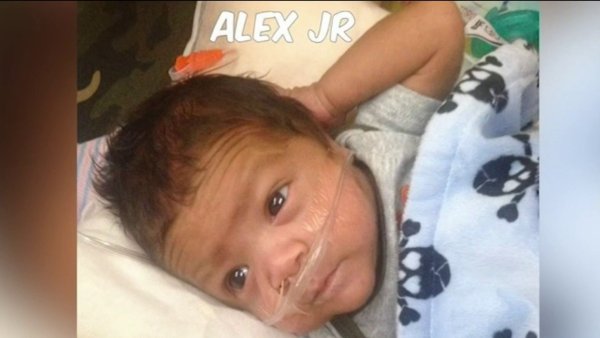 Samuel and his girlfriend were each shot five times last Monday in the Costco parking lot. Their 6-day-old son was feet away in a stroller when they were ambushed.

The shooter, Sean Illian, was Angelina’s ex- boyfriend. Family members say they dated for 10 years before a bad breakup.

"He was very controlling. It wasn't a healthy relationship. She was trying to get away from him forever," Frances said.

Angelina moved on and moved away. She and Samuel came back to the Chula Vista area only to have their son and be with family for a month. How Illian found them at Costco is still a mystery.

"Either he was following them all along or one of his friends that didn't know he was crazy said, ‘Hey, I saw your ex’”, Frances said.

Frances says the birth of her grandson was Sam's happiest moment.

“I have this baby and I am a dad now. Then six days later this bubble pops. I can hear it in his voice saying, ‘Mom, I am very happy,’" Frances said.

It is a happily ever after interrupted by a past they wanted to forget. Despite the uncertain future, this mother and grandmother has hope.

"Make them super strong. Super strong and not afraid of life later on," Frances said.

Family members say Angelina has been able to see her son but because of the sensitivity to infection, Samuel has not.

They say Samuel's hospital stay could be several months, and are hoping Angelina's release will be much sooner.

A GoFundMe page has been set up to help the family recover.