Red tides are unpredictable and scientists are still trying to understand what sets them off, and what shoos them away. Get to a San Diego beach before the electric-blue waves are gone!

Red tide. Bioluminescence. Algae bloom. You know, those supercool, electric-blue waves? Whatever you like to call them, they’re back for now at San Diego County beaches.

San Diegans have been photographing the marvel this week. One night owl, Patrick Coyne, even captured a magical moment when a pod of dolphins swam through glowing waves Wednesday night.

Dinoflagellates, a type of algae that moves through the sea, create the bright blue light known as bioluminescence when they form in massive numbers. The organisms have a color that makes the ocean appear red in the daylight, hence the term red tide. But, the organisms glow as a natural defense mechanism that becomes visible in breaking waves or when approached by other swimming organisms, especially at night.

How Long Will the Waves Stick Around?

Red tides are unpredictable and scientists are still trying to understand when it occurs. So it’s hard to say how long this round of bioluminescence will last.

You might remember the big bioluminescent event that entertained us for about eight weeks at the beginning of the coronavirus pandemic in 2020. It’s too early to say if the current event will last as long, but Scripps Institution of Oceanography scientist Clarissa Anderson said it’s possible based on recent weather patterns.

“Given that we don’t know if the conditions are going to be exactly how they were [in 2020], what I do think is interesting is how similar this event has been to the initiation period of the last one,” said Anderson, the executive director of the Southern California Coastal Ocean Observing System at Scripps. “We did see a lot of rain ... That did seem to help get the bloom going, but I think what helped it stay and last and grow so vigorously, in part, was how warm the water was and how much the water kind of stayed around and we didn’t have that mixing. So if we see that again this time it could stick around.”

During the big bloom event in 2020, NBC 7 showed you a surfer who found “pure bliss” riding the glow-in-the-dark waves, and you also met Balto the husky who didn’t need a surfboard to have his fun.

Anderson said there’s a common misconception that red tide events are pollution-related, or that they are somehow toxic or a sign of unhealthy waters. 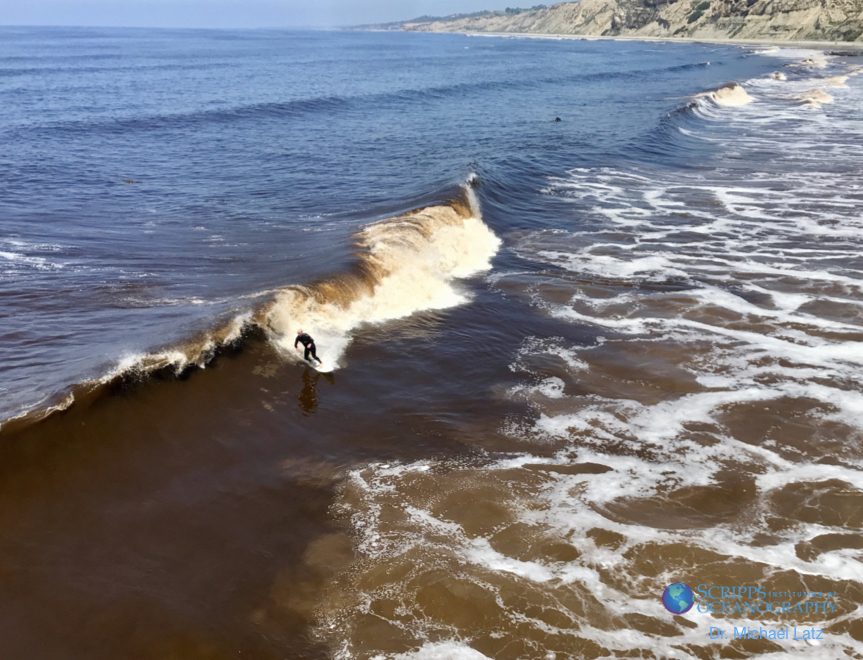 “There is an influence of nutrients coming from runoff that might help kickstart a bloom, but I don’t think we need to imagine that these red tides are a symptom of a polluted environment,” Anderson said.

The glowing waves have also come around, and stuck, during dry stretches in San Diego, Anderson added.

“It really just means a lot of these things are opportunistic and they’ll take their nutrients where they can get them,” she said.

The misconception could be due to the strong odor brought along by the last red tide event. That, too, however unpleasant, was natural, and Anderson said stinky waves aren’t the norm.

“The situation we had in 2020 was really unique. We don’t typically see these blooms get to that point,” she said. “Normally we don’t think of these blooms as being pretty stinky. They will discolor the water red, they might cause irritation to surfers and swimmers, and we’re seeing a little bit more of that potentially, but as far as the smell goes, that was a rare event. So it will be interesting to see if that evolves again.”

The stench, according to Anderson, was caused by the blooms drawing down the oxygen levels in the water which contributed to an influx in bacteria and the decaying of organisms.

NBC 7 took note of hilarious reactions to the stench from Facebook in 2020.

How Often Does Bioluminescence Occur?

In Anderson’s experience living in San Diego for the last five years, the area has seen about one bioluminescent event per year.

“In the last five years, we’ve seen one of these events almost every spring… It seems to be becoming more common in the spring. We did see some last year, too, it just wasn’t quite the duration it was in March 2020,” she said.

So, you might want to head out to a shoreline after nightfall sooner rather than later if you want to see one of Mother Nature’s coolest light shows.

Photographer and videographer Patrick Coyne (@patrickc_la on Instagram) chases the electric blue waves up and down the coast.
A Southern California photographer who chases the glowing blue bioluminescent waves made the most of it recently shooting video of his friend's dog, Balto.
Balto the Dog enjoyed a nice nighttime swim as bioluminescence lit up the water in Newport Beach, California! (Credit: Patrick Coyne)
Jared Henry went surfing in electric blue water in Ocean Beach.
It looks pretty but it sure can stink. NBC 7's Omari Fleming explains why.
NBC 7's Joe Little spoke with a Marine Biologist who said the red tide is okay to enter.