A security guard heard gunshots at 7:30 p.m. Saturday outside the shelter

A downtown San Diego homeless shelter has identified the unarmed security guard who was shot and killed while on duty Saturday night.

Buchanan, 44, was patrolling a temporary homeless shelter on Imperial Avenue when he heard gunshots at 7:30 p.m., according to the San Diego Police Department.

“I was inside, and I thought the gunshots were right outside the door,” said shelter resident Sabrina Hilbert. “I got down on the ground super fast once I heard, ‘Get down.’”

“A lot of people were crying, and I started crying because I have never been so close to death,” Hilbert said.

Police were still searching for the suspect in the East Village. NBC 7's Danica McAdam reports.

When SDPD arrived at the shelter, officers found Buchanan with gunshot wounds to his upper body. He was transported to a nearby hospital but died from his injuries, police confirmed.

“He was the embodiment of respect, for us, for us, in the way he treated our people,” said McElroy. “He just treated everybody as an individual. Everybody was important.”

McElroy said Saturday's shooting was the first time he questioned whether he should quit.

Buchanan's death was felt by many at the shelter.

“He was just a part of the family. He fed us every night. He definitely went over the top on his job,” Hilbert told NBC 7. "He always kept people up – right before he got shot, we were all joking about the Ohio State game."

Buchanan had just returned from his break before the gunfire began, according to the Alpha Project. He was shot multiple times, police said.

"He was a very nice guy. Always upbeat, always helping everybody," shelter resident Chris Bradley said. "He was one of their best employees as far as everyone here is concerned."

Juanita Broughman, another resident, told NBC 7 that Buchanan "meant something to me."

"He was a beautiful and wonderful person," she said.

SDPD Lt. Martha Sainz said people in the area either ran away or ran for cover when the gunshots began, so witnesses could not provide officers with a description of the shooter.

SDPD Mobile Command Unit remained at the shelter Monday morning as the investigation continued. The unit also provided a police presence in the area for added protection.

Candles, flowers, and balloons were placed outside the shelter to celebrate Buchanan’s life. Alpha Project employees made shirts with an image of Buchanan on them, which read, “In Loving Memory / Ernest Buchanan.”

The Alpha Project said it will pay for Buchanan's funeral expenses.

A vigil honored Buchanan Monday at 6 p.m. in front of the 17th Street and Imperial Avenue shelter downtown.

McElroy said it is "very, very difficulty, if not impossible" to secure the shelter because of its location.

The Alpha Project and San Diego city leaders will discuss how to increase security at the shelter in future.

"Unfortunately, the way the world is today, you can’t go get chicken, you can’t go to a movie theater, you can’t go to church without looking over your shoulder that some whack job might come in and take everybody out," the Alpha Project CEO said. "We are certainly looking at having one armed person here, so we at least have a chance to fight back."

The city told NBC 7 it isn't considering adding an armed security guard at the shelter because there is an SDPD mobile command station regularly stationed near the shelter.

“The well-being of residents and staff is the top priority at all homeless facilities. SDPD maintains a consistent presence in this part of downtown, and the City already provides security at each of the bridge shelters. We don’t have any information at this time to conclude this terrible incident was meant to target the shelter itself, but we will continue to work with Alpha Project to protect public safety," a statement from SDPD said.

The shelter was placed on lockdown for several hours during the investigation with nearly 130 people inside, McElroy said.

Law enforcement looked at possible surveillance footage as cameras could be seen in front of the shelter.

The City of San Diego opened the homeless shelter just last month. The Alpha Project was chosen to operate the new facility serving single adults, veterans, and families. Buchanan has worked at the shelter since it opened, McElroy told NBC 7. 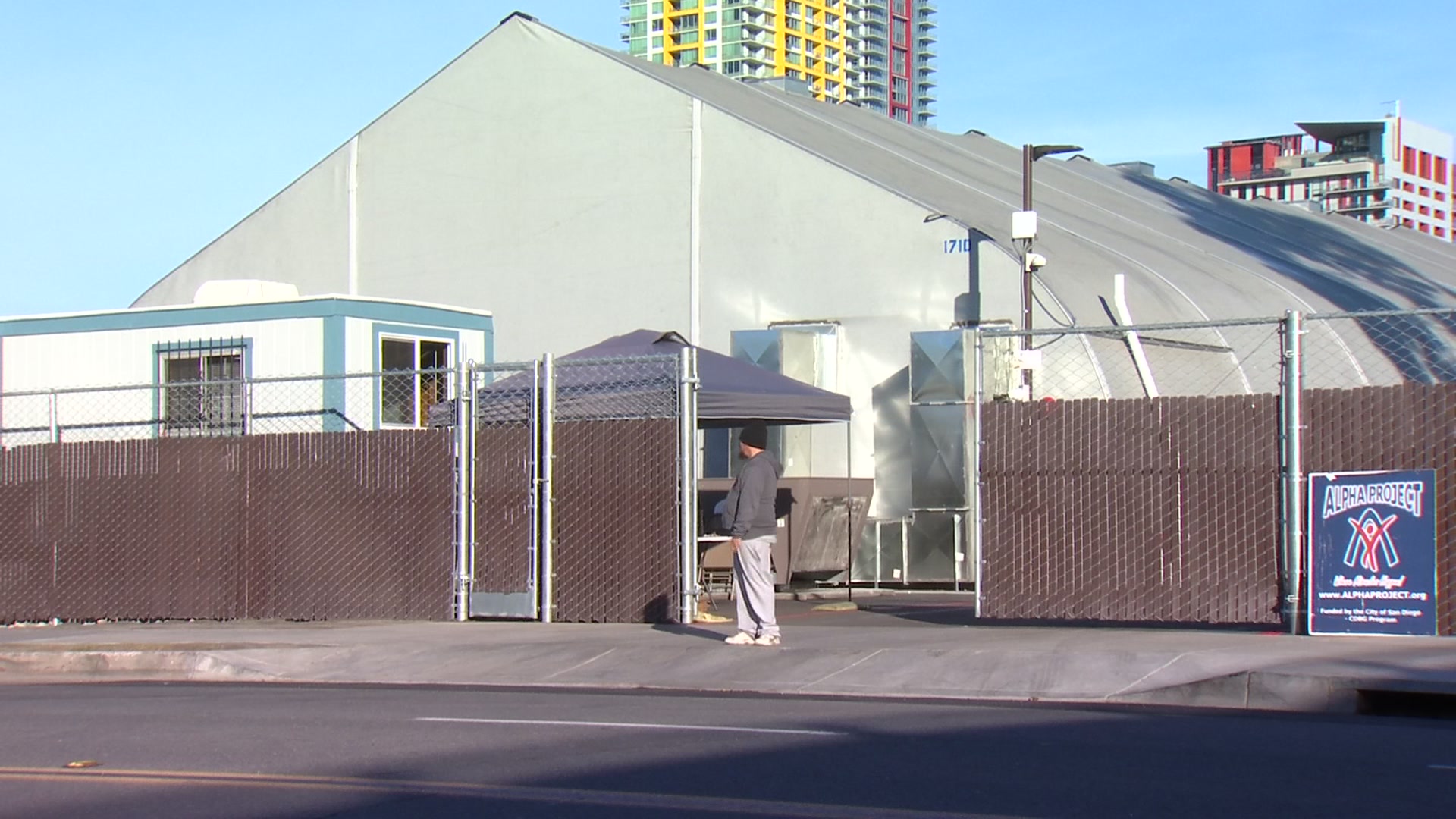