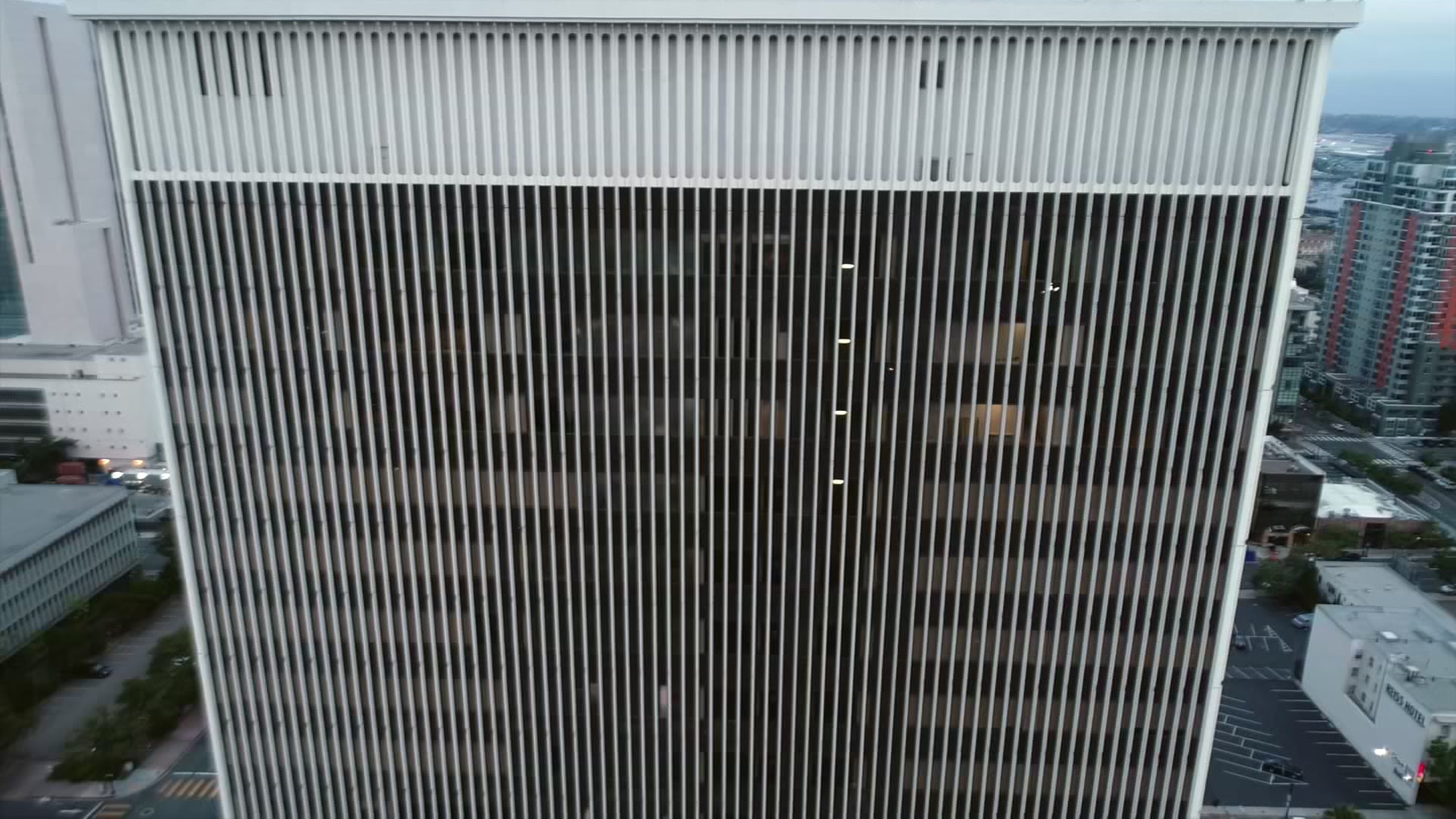 City Officials Knew 101 Ash St. Was Riddled With Asbestos — So Why Were Hazards Ignored?

NBC 7 Investigates digs into the city's purchase of the now-vacant building, which is set to cost taxpayers $202 million over the next 20 years.

Whether the warnings came from city engineers, outside engineering firms, contractors, or from the building’s former tenant, the city of San Diego was repeatedly warned over the years about safety issues inside 101 Ash Street.

New documents unveiled by NBC 7 Investigates show that despite the number of warnings the city trudged forward with a major renovation of the newly acquired high-rise downtown, a decision that has resulted in dozens of legal claims against the city by workers who say city officials put their health at risk.

Adding to upcoming lawsuits, the city has paid more than $58 million in lease payments and renovation costs to get the 1966 building up to code since taking possession of it in January 2017.

Meanwhile, the 21-story building that the city will pay $202 million for in a lease-to-own deal sits vacant after San Diego County officials ordered employees to evacuate in December 2019 following the discovery of substantial amounts of asbestos inside.

Now, as the city prepares for the release of a third-party forensic investigation into what went wrong with the purchase of the building and the renovation that followed, NBC 7 has put together a comprehensive look at how the city and its taxpayers wound up paying millions of dollars for a now vacant, and potentially dangerous high-rise.

The city was made aware of potential red flags long before signing on the dotted line. In fact, the city had been in negotiations with the previous owner of 101 Ash Street for a year before it eventually purchased the building in late 2016, NBC 7 has learned.

It was during those negotiations that the previous owner, Sandor “Sandy” Shapery said that he had given the city thousands of pages of documents detailing the building's condition, including information that asbestos was present.

“I made full disclosure of everything. I gave them a thousand pages of documents, everything, dating back to 1993,” Shapery told NBC 7. “All asbestos documents were provided.”

And even after the city moved forward, Shapery said it chose to perform a major overhaul of 101 Ash Street, despite knowing the dangers hidden behind its walls.

“The problem occurred when the city changed plans and decided to do a major remodel,” said Shapery. “The problem is that nobody anticipated that major asbestos abatement. The city chose to do a large-scale renovation. That wasn’t the original plan... they were doing asbestos abatement and not handling it properly.”

Even in the original purchase agreement for the building was a warning:

“Buyer acknowledges that the building contains asbestos and that Sempra has maintained an asbestos monitoring and handling program…” reads the agreement obtained by NBC 7 Investigates.

In fact, building inspectors told council members that $10,000 worth of pressure washing was all that was required of the city of San Diego to perform at 101 Ash Street before giving the green light to move in.

Marlon Perez is an Assistant Engineer in the city of San Diego’s Engineering and Capital Projects Department and was part of the original team assigned to Ash Street.

Perez says it didn’t take long for him and others assigned to Ash Street to see that far more was needed than $10,000 in pressure washing.

“The moment we opened the wall, thinking that we were going to put a light switch in, we noticed there are things behind the wall. There was far more than meets the eye when it comes to this building. That’s when we started to feel the pressure to get this project done,” Perez told NBC 7.

In a March 2017 report obtained by NBC 7 from a third-party, an engineering firm hired to assess the building concluded the power system, HVAC system, and fire prevention system were in need of complete overhauls.

BSE Engineering's report found that the building was not up to current building code due to electrical deficiencies and, as was suspected, that “evidence of asbestos...would likely impact the design and implementation schedule and project costs,” reads the report.

Employees and contractors who worked inside the building tell NBC 7 Investigates that they were not informed of asbestos.

Perez said so much dust, possibly contaminated with asbestos, was flying during the renovation project that the filters used to measure contamination became clogged, thus making the tests unreliable.

“We weren’t able to take samples in order to tell what was hazardous and what was not because the testing filters were clogged,” said Perez.

Perez said his managers ignored his calls to require workers to don masks and respirators inside.

“Management told me that they don't have the ability to do that and it would cost them millions of dollars to train the crews,” Perez said.

In addition to the asbestos inside, Perez said the city’s Fire Marshall found small penetrations on the floors had been made decades prior. The Fire Marshall saw those holes and informed Perez that the city had to fill them due to the fact that the air coming through them could increase the severity of a fire.

Perez said he told his bosses and they reprimanded him immediately -- the details of which were included in both an internal complaint Perez filed, as well as a formal whistleblower complaint.

“They told me, what are you doing walking with the Fire Marshall? You should not be doing that. And they got on my case about it. And, guess what, those holes are still there. I know they are still there. I kept bringing this up and it was just, ‘Shut up. Don't say anything. Keep moving forward.’”

Perez said he felt compelled to make his issues known, not for him but for the safety of those workers inside.

“I knew of the life safety issues and there was no way that I could allow for them to move in, knowing that these issues had not been addressed. There was an obvious life safety issue if not rectified.”

Yet, after numerous complaints to his managers, Perez said he was pulled from his position.

In February 2020, Perez filed a whistleblower complaint against the city of San Diego.

But Perez was not the only one sounding the alarms about fire hazards inside.

“If there had been a fire, there was no way to isolate it. We went to the city and told them that the fire system was no longer functioning the way that it was designed,” said Lee.

In their report to the city, BSE Engineers also discovered the building’s emergency and standby electrical system was not “in code,” and despite it having been grandfathered in, any improvements done would nullify the grandfather clause and force the city to meet current code requirements.

By August 2017 the price tag to renovate the building had ballooned to $19 million. Despite the rising price tag, the mayor’s office pushed ahead, ordering city staff to expedite the move, according to multiple workers who spoke to NBC 7.

Despite the warnings, In December 2019, the city announced the building was open.

So, how did the city of San Diego, and taxpayers, end up with the vacant high-rise?

TROUBLE FROM THE START

As first reported by NBC 7 Investigates, in November 2014, James Seifert, a consultant for Sempra Energy, testified in front of the Public Utilities Commission about the need for the company to move from 101 Ash Street due to the presence of asbestos and seismic deficiencies.

“The functional obsolescence of the headquarters building, originally built in 1966, generated additional concerns, including remaining asbestos abatement,” reads Seifert’s testimony to the CPUC.

With the city in need of office space downtown, city representatives and Shapery met. According to documents obtained by NBC 7, from February 2015 through July, Shapery and the city were unable to make a deal.

In July 2015, real estate developer Doug “Papa Doug” Manchester purchased 49% ownership of 101 Ash. By June the following year, less than 11 months later, Shapery and Manchester entered into an agreement with Cisterra Partners to sell the building for $72.1 million.

The purchase agreement, also obtained by NBC 7 Investigates, shows that the city would lease the building from Cisterra for 20 years with an option to buy for a total of $202 million with financing, operational and maintenance costs, and some minor improvements.

Shapery told NBC 7 Investigates that Manchester was ready to sell his portion immediately after buying into 101 Ash.

“All Manchester wanted was to sell and get a nice profit,” said Shapery. “By the time the transaction closed, that’s exactly what he got."

Shapery also told NBC 7 Investigates he believes that Manchester and Faulconer’s political ties played a part in the negotiations.

“My personal belief is that having Manchester as a partner was a detriment,” Shapery told NBC 7. “Manchester is Mayor Faulconer’s largest contributor. My feeling is the city wanted a way around it, after all, how does it look to have the mayor enter into a major land deal with his largest contributor? I am not sure if it was ever spoken but I could see the mayor being reticent to do a deal, just the appearance of impropriety would be enough to make them want to avoid it.”

The San Diego Union-Tribune reported that Manchester has donated tens of thousands of dollars to Mayor Faulconer and his causes.

In a statement, a spokesperson for Mayor Faulconer rejected any claims that Manchester had any role or influence on the purchase.

Attempts by NBC 7 to contact Manchester through a representative went unanswered.

On September 21, 2016, Cybelle Thompson, director of the city’s Real Estate Assets Department and Assistant Chief Operating Officer Ronald Villa, who has since resigned over his involvement with 101 Ash Street, made the pitch to the city council’s Smart Growth and Land Use Committee.

Villa and Thompson sweetened the proposal by telling the City Council the cost for moving employees into the building, along with the promise of new furniture, would cost taxpayers $6.9 million, including the first year’s worth of rent.

At no time did the city executives mention the possibility of disturbing large amounts of asbestos or an inadequate heating and air conditioning system.

Through all of the complaints, Mayor Kevin Faulconer’s Office has remained steadfast in its defense of the $202 million lease-to-own agreement.

“The building acquisition made financial and operational sense based on the need for additional real estate to accommodate its growing workforce,” city spokesperson Scott Robinson told NBC 7.

In regards to allegations that the city failed to conduct adequate inspections before purchasing the building, Robinson said, “It is real estate industry standard that the buyer does the due diligence and assumes the responsibility for the condition of the property. The City performed its due diligence in conjunction with active, downtown developer and building owner Cisterra who was in the process of purchasing the property.”

Added Robinson, “A forensic investigation is now underway to determine how the City ended up in this position and how to address the situation moving forward.”

In response to the controversy surrounding 101 Ash, Mayor Faulconer commissioned a third-party “forensic investigation.” That report is expected to be released in the coming weeks.

By that time, attorneys for the contractors who have filed legal claims say they also plan to file lawsuits.

Contractor Lee will be one of those filing a lawsuit over health risks associated with working inside 101 Ash Street.

“This is the first time that I was in a building where we were getting what I believed was misinformation about how bad the situation was. They didn't care what the situation was inside. They were going to put people in.”