Virus Updates: More Than 200,000 Cases in US Sets Single-Day Record

Health workers and nursing homes will be the first to receive the coronavirus vaccination, the Center for Disease Control and Prevention announced Tuesday. The first phase of the vaccine rollout will be known as Phase 1a and is set to begin as soon as a vaccine receives authorization from the Food and Drug Administration, expected to happen this month.

Despite record numbers of coronavirus cases across the nation, the CDC is also set to shorten the recommended length of quarantine after exposure to someone who is positive for COVID-19 from 14 to 10 days, or 7 days with a negative test.

An NBC News count has confirmed over 200,000 COVID-19 cases reported Wednesday in the U.S. for a new single-day record.

The head of the Centers for Disease Control and Prevention has signed off on an expert panel’s recommendation that health care workers and nursing home residents be the first to get coronavirus vaccinations when shots become available.

Experts believe that when a vaccine becomes available, doses will be limited in the first weeks and months. That will mean officials will have to decide whether certain people should be first in line. Doctors have been watching for federal advice about how priorities should be set.

On Tuesday, the Advisory Committee on Immunization Practices voted 13-1 that the first people vaccinated should be health-care workers and patients in nursing homes, long-term chronic care hospitals, and other U.S. long-term care facilities.

A coalition of U.S. colleges and universities is urging Congress to pass a new coronavirus relief bill with at least $120 billion for higher education, saying the sector faces a crisis of “almost unimaginable” scale.

The letter signed by the American Council on Education and 100 other groups says financial losses caused by the pandemic are far worse than schools had expected. Colleges have laid off thousands of workers to cut costs, but the letter says the pared-down operations will unstainable without additional federal help.

Colleges have had to increase financial aid to help students who are struggling to pay tuition, and schools have lost revenue from closed dorms and dining halls.

Enrollments have also decreased amid the pandemic, with a 13% drop in freshmen across all U.S. institutions. At the same time, many states have cut their higher education budgets.

Virus Task Force Warns States: 'COVID Risk to All Americans Is at a Historic High'

A White House coronavirus task force report distributed to U.S. states earlier this week includes a dire warning that the country is in a "very dangerous place due to the current, extremely high COVID baseline and limited hospital capacity.”

“The COVID risk to all Americans is at a historic high,” according to the report obtained by NBC News.

The task force directs public health officials to circumvent state and local policies if they “do not reflect the seriousness of the current situation,” essentially advising them to take matters into their own hands and “alert the state population directly."

"It must be made clear that if you are over 65 or have significant health conditions, you should not enter any indoor public spaces where anyone is unmasked due to the immediate risk to your health; you should have groceries and medications delivered. If you are under 40, you need to assume you became infected during the Thanksgiving period if you gathered beyond your immediate household."

Dr. Anthony Fauci, director of the National Institute of Allergy and Infectious Diseases and a member of the White House’s coronavirus task force, has warned that “we are likely going to see a surge upon a surge” of cases, based on the number of people who traveled and gathered for Thanksgiving and on those who are expected to shop and attend holiday parties before celebrating Christmas and New Year's in large groups.

A leader of the Trump administration’s effort to produce and distribute a coronavirus vaccine says he expects the Food and Drug Administration to soon authorize the use of a vaccine.

Operation Warp Speed chief science adviser Moncef Slaoui says he hopes by Dec. 10 or 11, a Pfizer vaccine is approved in the U.S.

Slaoui told ABC’s “Good Morning America” he “would expect the FDA to reach a similar conclusion” as British authorities did by approving emergency use of a vaccine developed by American drugmaker Pfizer and Germany’s BioNTech.

Slaoui is urging people to listen to the experts about taking the vaccine, look at the data and keep their minds open. He says “great science” allowed researchers to do discovery work “in weeks rather than in years.”

Slaoui calls the vaccine “an insurance against this virus” and says it’s “what will get us out of this pandemic.”

Roche's Coronavirus Antibody Test Gets Emergency Use Authorization From the US

Roche received emergency use authorization (EUA) from the U.S. Food and Drug Administration for a new test that measures coronavirus antibodies within the blood.

It appeared to be positioning its tests as a way to gauge individuals' antibody response to coronavirus vaccines that could soon become widely available, noting that "many current candidate vaccines aim to induce an antibody response against the coronavirus spike protein. Tests that quantify antibodies to the spike protein could be used to measure the level of that response and track that measurement over time."

"Antibody tests like these will play a critical role in measuring a person's vaccine-induced immune response," Roche Diagnostics' CEO Thomas Schinecker said in a press release.

COVID-19 patients develop a certain level of immunity after battling the virus, but new studies find it may not last long.

Nearly 37,000 Americans died of COVID-19 in November, the most in any month since the dark early days of the pandemic, engulfing families in grief, filling newspaper obituary pages and testing the capacity of morgues, funeral homes and hospitals.

At Mercy Hospital Springfield in Missouri, a mobile morgue that was acquired in 2011 after a tornado ripped through nearby Joplin and killed about 160 people has been put into use again. On Sunday it held two bodies until funeral home workers could arrive.

At the Bellefontaine Cemetery in St. Louis, burials are up by about one-third this year compared with last year, and the cremated remains of about 20 people are sitting in storage while their families wait for a safer time to hold memorial services. The dead include a husband and wife in their 80s who succumbed to COVID-19 five days apart.

“You want to be safe at the gravesite so you don’t have to do another graveside service" for another family member, said Richard Lay, Bellefontaine Cemetery’s vice president.

The Star Tribune in Minneapolis-St. Paul saw a 40% increase in the number of pages dedicated to paid obituaries in November, largely because of COVID-19, a spokesman said. By Nov. 29, the newspaper had 11 pages of obituaries, compared with about half that many on a typical Sunday.

In Worcester, Massachusetts, the National Guard trucked in cots, medical supplies, tables and other items needed to operate a 250-bed field hospital in the event the state's medical centers become overwhelmed.

“Hospitals all around the country are worried on a day-to-day basis about their capacity ... and we’re not really even into winter season and we haven’t seen the impact of Thanksgiving travel and Thanksgiving gatherings,” said Dr. Amesh Adalja, a senior scholar at the Johns Hopkins Center for Health Security.

With cases spiking across the country, hospitals in some areas are nearing capacity and health care workers are feeling the strain.

Thinking of Traveling to Mexico During the Pandemic? CDC Tells Americans to Stay Home

The Centers for Disease Control and Prevention recommended on Tuesday that Americans avoid traveling to Mexico during the pandemic because the country is at Level 4, the highest risk assessment level, NBC Los Angeles reports.

As of March, the governments of Mexico and the United States have implemented land restrictions in force until Dec. 21 for non-essential travel. However, airlines have added additional flights, due to high demand despite the fact that entry to the country is only allowed to citizens and residents.

The World Health Organization pointed out that Mexico ranks fourth worldwide for deaths related to COVID-19.

Despite the pandemic, dozens of passengers lined up Tuesday at Los Angeles International Airport to travel to Guadalajara, Mexico.

The TSA has screened nearly five million travelers at the nation's airports, numbers not seen since the pandemic started stateside. Experts from the CDC said the phenomenon was "pouring gasoline on the fire," as infections and deaths continue to rise.

In a letter sent to the Department of Health and Human Services and exclusively obtained by NBC News, the American Ambulance Association said “the 911 emergency medical system throughout the United States is at a breaking point. Without additional relief, it seems likely to break, even as we enter the third surge of the virus in the Mid-West and the West.”

An HHS spokesperson said the agency has delivered nearly $107 billion to more than 550,000 providers across the country and opened a third round of funding of $20 billion last month, which they said is available to ambulance services.

That third phase of funding, however, comes with a limit. It’s available to every health care provider and supplier up to 2 percent of their 2019 revenue. EMS services said they’re thankful for the money, but it won’t keep them from potentially going under. 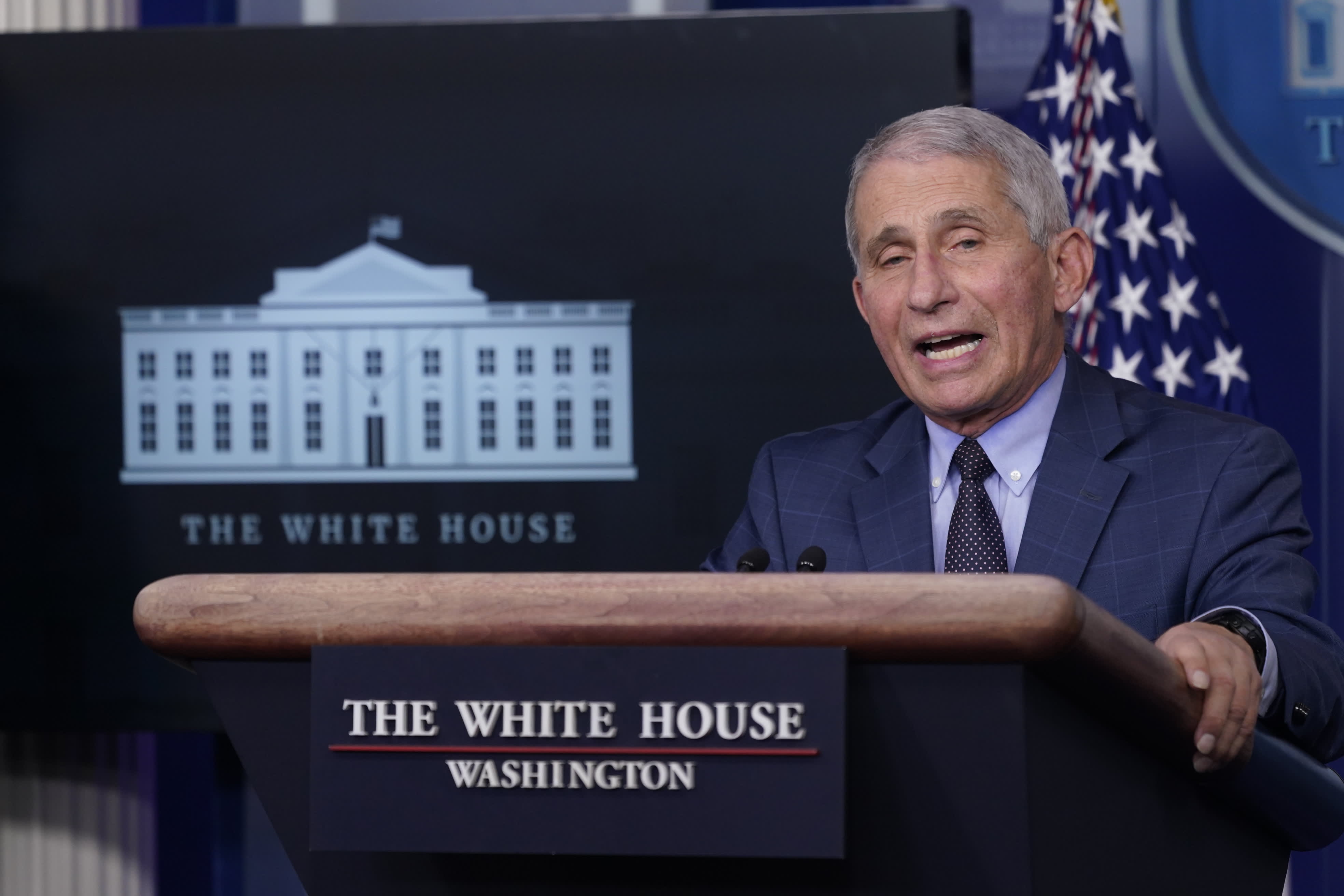 Dr. Fauci Warns the U.S. Will See a ‘Surge Upon a Surge' of Covid Cases Following the Holidays UN Warns Pandemic to Fan Surge in Humanitarian Needs in 2021