When reached for comment Thursday by CNBC, HHS spokesman Michael Caputo said in a statement that CDC has been directed to reestablish the data

Previously public data has already disappeared from the Centers for Disease Control and Prevention’s website after the Trump administration quietly shifted control of the information to the Department of Health and Human Services.

Since the pandemic began, the CDC has regularly published data on availability of hospital beds and intensive care units across the country. But when Ryan Panchadsaram, who helps run a data-tracking site called Covid Exit Strategy, said he tried to collect the data from the CDC on Tuesday, it disappeared.

“We were surprised because the modules that we normally go to were empty. The data wasn’t available and not there,” he said. “There was no warning.” 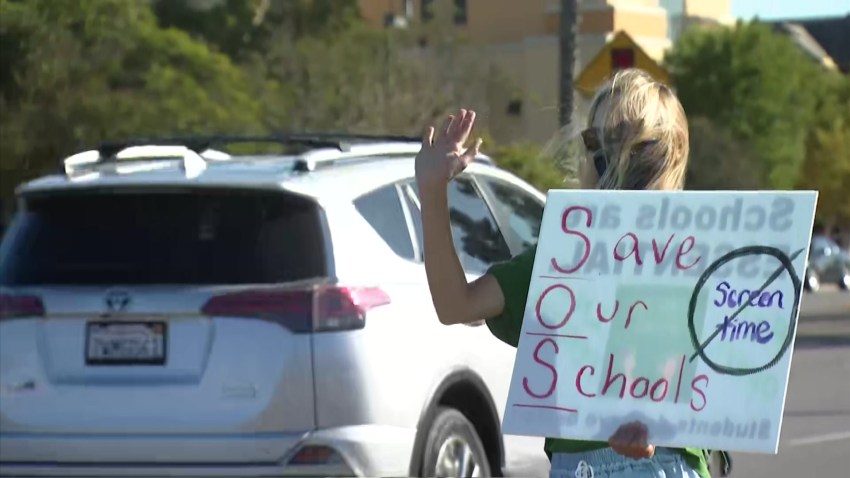 Parents Rally at SDUSD Headquarters for Return to In-Person Learning

CDC Director Dr. Robert Redfield told reporters on a conference call Wednesday that states were told to stop sending hospital information to the National Healthcare Safety Network site, the CDC’s system for gathering data, beginning Wednesday. Instead, all data will now be reported through HHS’ reporting portal, officials said, adding that the decision was made to streamline data reporting and to provide HHS officials with real-time data.

Public health specialists and former health officials acknowledged that the CDC’s data reporting infrastructure was limited, and said it needs to be overhauled to meet the demands of the Covid-19 pandemic. However, they expressed concern in interviews with CNBC that the change could lead to less transparent data.

When reached for comment Thursday by CNBC, HHS spokesman Michael Caputo said in a statement that the CDC was directed to make the data available again. In the future, he said “more powerful insights” will be provided by HHS.

“Yes, HHS is committed to being transparent with the American public about the information it is collecting on the coronavirus,” he said. “Therefore, HHS has directed CDC to re-establish the coronavirus dashboards it withdrew from the public on Wednesday.”

Representatives of the CDC did not immediately respond to CNBC’s request for comment.

The CDC’s web page for data on available hospital and ICU beds has been replaced with a note that reads: “Data displayed on this page was submitted directly to CDC’s National Healthcare Safety Network (NHSN) and does not include data submitted to other entities contracted by or within the federal government.”

“We don’t have this critical indicator anymore,” Panchadsaram said. “The intent of just switching the data streams towards HHS, that’s fine. But you got to keep the data that you’re sharing publicly still available and up to date.”

Panchadsaram said he and his team, which includes researchers from the Duke-Margolis Center for Health Policy and from Resolve to Save Lives, a public health initiative led by former CDC director Dr. Tom Frieden, have been tracking the data since April.

Panchadsaram thinks of the project as something of a “progress czar” as they grade different states on the overall progress they’ve made in fighting Covid-19. Available hospital beds and ICU capacity is a key indicator they use to assess state performance, he added.

“It’s disappointing. It happened a lot quicker than expected,” he said. “The picture that we’re presenting to the world is incomplete.”

Other coronavirus researchers and public health specialists expressed concern because the policy change was announced so suddenly in the midst of a public health crisis that appears to be worsening.

Dr. Jennifer Nuzzo, an epidemiologist at Johns Hopkins University, which runs one of the most popular third-party coronavirus data dashboards, said the policy change won’t impact the Hopkins site because they’ve managed to source their data directly from states.

“What worries me is that we seem to be pushing rather suddenly in the midst of what feels like a very urgent time in terms of surging cases that we’re seeing across the country,” she told CNBC. “The question is, what are we going to lose in this transition, and in particular at a moment where we really don’t want to lose any ability to understand what’s happening in hospitals.”

Nuzzo expressed concern that the administration didn’t appear to fully plan out how the transition in data reporting would work and didn’t give hospitals or researchers a warning about the change or how it might affect them.

“I think it’s reasonable to worry that it could lead to erosion of capacities at a moment where we very much can’t afford to lose any abilities at this point,” she added. “I don’t fully understand how it’s going to work. That in and of itself is problematic.”