The mandate passed 8-1, with Councilman Chris Cate casting the only no vote.

"I think it's unfortunate that this issue has become so politicized," Cate said ahead of the vote, pointing out that he and his wife are vaccinated and that he has joined others to urge San Diegans to get vaccinated.

"But I also believe that individuals have a choice, and, given where we are today when it comes to staffing and the ability to deliver basic city services to our residents, I feel that as policymakers, we should understand the balance that needs to be employed," Cate said. "Not only does the potential exist to lose police officers, but we could also lose dispatchers and sanitation drivers and other positions that are already critically understaffed." 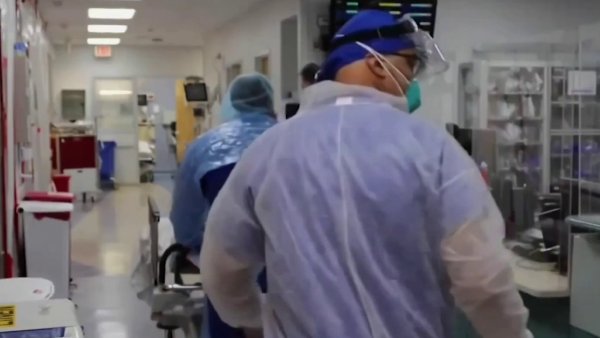 So Many Have Caught Omicron, Could It Signal End of Pandemic?

The policy will require all city workers to be vaccinated by Dec. 1 as a condition of continued employment. All city contractors who interact in person and indoors with city employees have until Dec. 3. The mandate as passed on Monday allows for medical and religious exemptions on a case-by-case basis, though some critics have voiced concerns about how they would be granted, since, in all likelihood, not all exemptions will be granted.

As well as impacting city workers, all elected officials, members of city boards and commissions and authorized volunteers will need to be immunized against the coronavirus by Dec. 1.

San Diego City Councilmembers are expected to make a decision on potentially implementing a COVID-19 vaccine mandate for city workers. NBC 7’s Ashley Matthews has more information for you.

The vote came after a contentious virtual public-comment period, which followed months of discussions about the mandate. Monday's vote came in the wake of months of negotiations with the municipal unions that represent first-responders and all other city workers.

Nearly 200 people wrote in and dozens called in, the vast majority of whom opposed the vaccine mandate. Many used inflammatory language, comparing the mandate to Jim Crow laws and the Holocaust.

"When I hear people referencing the civil rights movement, Rosa Parks and Martin Luther King Jr. without the experience, that is concerning for me," said Councilwoman Monica Montgomery Steppe. "I don't equate that to this decision today.

"I don't respect those references; I think they are extremely far-reached," she said.

"Nobody is being forced to take the shot," Elo-Rivera said. "It is a requirement for certain activities. This is not Jim Crow and this is not genocide."

Elo-Rivera said the callers using those comparisons were "tortured logically."

While Elo-Rivera noted his appreciation for Cate's argument, he voted in support of the mandate while decrying the tone of some of the mandate's critics.

"I think that in Councilman Cate's comments, we heard someone stick to the facts, do an analysis and come to a conclusion, and I wish that more of this conversation sounded like that," Elo-Rivera said. "I'll be honest: Look, you'll find few folks who appreciate public participation more than I do, but the tone does concern me because of the politicization of an issue that is really about health and safety."

Mayor Todd Gloria proposed the mandate on Aug. 26 and had since reached agreements with five of its six recognized employee organizations. The city was at an impasse with the San Diego Police Officers Association, whose officials said officers should have more options and that the majority of its members did not support the mandate.

As of Nov. 24, 709 of the department's 1,979 officers have not been vaccinated. The city said 167 officers requested exemptions.

Gladstone said the city might have to prioritize how it responds to emergencies if it finds itself with an officer shortage.

“If we were to lose a vast number of police officers, we'll have to reprioritize some of the calls they go on in the short-term, and try and beef up some of the academies that take place,” Goldstone said.

The police union says that's barely enough to cover the roughly 13 officers that retire or resign each month. And then there's the time it takes for new officers to get up to speed.

"It probably takes somebody, you know, a year-and-a-half, maybe two to really get up to speed where they can do the job well," Schaeffer said.

Overtime is another contingency plan the Mayor's office says will be used to help stem the loss, but Schaeffer says that can't compare to boots on the ground.

“You get a couple of critical incidents on a night and next thing you know, your field resources are depleted, dealing with a couple of things. And then what happens when that third incident happens ?” Schaeffer said.

Nearly 1,300 city employees across all departments have been impacted by COVID-19, Gloria said at a news conference after the mandate passed. The mayor said that since July of last year, more than 1,100 trash pickups impacting 1.3 million residents, were delayed; the police department has had to suspend police-academy operations twice; and the city's fire and safety department has had to temporarily close two fire academies and made operational changes when 30 personnel had to isolate at the same time.

The city's chief operating officer, Jay Goldstone, who appeared at the news conference along with Gloria, said that 80% of the municipal workforce was vaccinated, but some 2,000 employees had not yet gotten the shot.

It did not take long for San Diego County Supervisor Jim Desmond to weigh in on the debate.

"Earlier today, the San Diego City Council voted to mandate vaccines for all city workers, forcing people to choose between getting vaccinated or losing their job," Desmond posted just minutes after the city council vote. "With over 30% of police officers facing termination, the city of San Diego is now facing a crisis. Providing safety is the No. 1 priority for government, yet political motives have interfered. Police officers, firefighters and front-line workers have all bravely served the public over the last 18 months but are now being cast aside."