An Army of Sewers Is Making DIY Masks for Health Care Workers. Will Hospitals Use Them?

If the shortages continue, some hospitals may have little other option.

Across the country, an army of mask-making home-sewers has banded together to produce face masks for health care workers on the front line who are running desperately short of personal protective equipment as the coronavirus pandemic intensifies.

And while some hospitals say the do-it-yourself face masks are a last resort but better than nothing, others have declined to accept the handmade gifts, citing specification requirements and concerns with their effectiveness to protect doctors and nurses treating patients with COVID-19.

The University of Wisconsin Hospital and Clinics, the LCMC Health group of New Orleans hospitals, St. Peter's Health Partners in upper New York state and the Medical University of South Carolina are among medical institutions that have said they wouldn't take DIY masks.

“We appreciate our community’s thoughtfulness and generosity to sew masks. Currently, we are not accepting homemade masks,” said MUSC spokesman Tony Ciuffo in a statement to NBC. “Depending on the use of the mask and material used to make the masks, there is a risk for pathogens to be absorbed and concentrated in the material used. These pathogens could pose a risk to our employees’ skin or respiratory tract when inhaled, as the amount of pathogens become more concentrated."

The N95 mask is in high demand amid the Coronavirus outbreak in the United States. NBCLX’s Clark Fouraker takes a deeper look all the news surrounding the mask.

Mary Dale Peterson, president of the American Society of Anesthesiologists and chief operating officer at a Corpus Christi, Texas, children’s hospital, said she declined volunteers’ offers to make masks. She said construction and manufacturing industries instead should donate or sell the high-grade masks they have to hospitals.

“It would be only an extremely, extremely last resort that I would have my staff” wear homemade masks, she said. “I really hope it doesn’t get to that point in the U.S.”

But the virus is spreading rapidly and starting to max out health care systems in several cities. If the shortages continue, some hospitals may have little other option.

Pam Hight, spokeswoman for Deaconess Health System in Evansville, Indiana, said the hospital's system realized it could face a shortage if local infections skyrocket like they have elsewhere. So officials produced and posted a how-to video that has been shared across the country.

“We had people who wanted to ship them to us from all over the United States and we started saying, ‘Please, please use them in your communities,'" she said. “It makes your heart warm; people are so good.”

She said Deaconess expects to collect thousands of masks this week at an off-hospital site and sanitize them before distributing them to nurses and doctors or sending them to local nursing homes and homeless shelters.

Providence St. Joseph’s Health in the hard-hit Seattle area last week put together kits using special material and distributed them to people willing to sew them. But the company said Tuesday that it was discontinuing the effort because local manufacturing companies had begun making masks and face shields quickly and on a larger scale.

Last week, President Donald Trump invoked the Defense Protection Act, a rarely used, decades-old authority that can be used to compel the private sector to manufacture needed medical supplies like masks and ventilators. But Trump has so far resisted calls to use it, arguing the private sector has voluntarily stepped up on its own and equating the DPA to "nationalizing" entire industries.

The nation's governors have been pressing the federal government to exercise the law to address the need for more supplies as the number of cases continues to balloon across the country. They say the allotments their states have received from the U.S. government's national stockpile are not enough and in the absence of federal coordination, they've been forced to compete against one another in bidding wars for products from a limited number of suppliers.

"This is ad hoc," said New York Gov. Andrew Cuomo Monday at a daily briefing. "I’m competing with other states. I’m bidding up other states on the prices. Because you have manufacturers who sit there and California offers them four dollars, and they say ‘well California offered four dollars.’ I offer five dollars, another state calls in and offers six dollars. It’s not the way to do it. I was speaking to Illinois Gov. J.B. Pritzker yesterday about this. Why are we competing? Let the federal government put in place the federal Defense Production Act. It does not nationalize any industry. All it does is say to a factory, you must produce this quantity. That’s all it does." 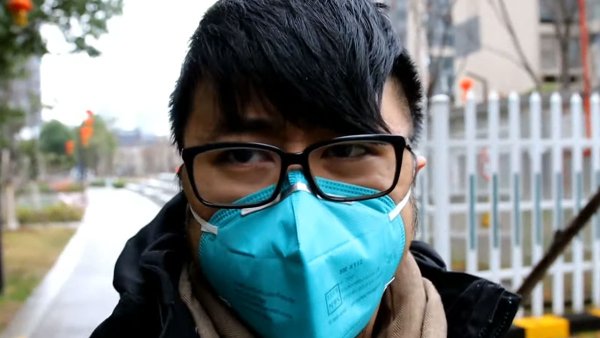 American Stuck in Wuhan Offers Advice on How to Stay Sane

In the meantime, in response to the shortage, the Center for Disease Control and Prevention loosened their guidance on which face protection front-line workers should use to ward off the highly contagious disease stemming from coronavirus.

Federal officials had previously advised hospital workers to use surgical masks when treating patients who might be infected with coronavirus amid reports of dwindling supplies of more protective N95 respirator masks, which filters out airborne particles. The FDA advises that neither should be used more than once.

Last week, the CDC quietly updated its guidance, saying hospitals that run low on N95 or surgical masks should consider ways to reuse them or to use them through an entire shift. And if hospitals run out, the CDC said, scarfs or bandanas could be used ”as a last resort,” though some health officials warned cloth masks might not work.

The recommendation was met with skepticism from the nation's largest union of registered nurses. National Nurses United, which represents more than 150,000 RNs across the country, suggested in a statement to members that the CDC's weakened guidance was borne of political expediency instead of science.

“The CDC’s guidelines are meaningless because they are based on inadequate stock, not on actual science about what protects nurses and other health care workers,” said NNU Executive Director Bonnie Castillo, RN. “We need the highest level of protections — N95 respirator masks and other protective gear — not surgical masks or bandanas."

NBC News reported that the "overwhelming majority" of health care workers who responded to a survey seeking first-person accounts from those on the front lines of the pandemic expressed concerns about the lack of N95 masks. Some respondents reported their hospital had no respirator masks at all, while others said they are being asked to reuse them for several patients and even several days.

“It’s scary to have to reuse the mask,” said a nurse who works at a Massachusetts hospital. “At the same time it’s like, what are you supposed to do if there’s none to be had?”

Still, scores of people have answered pleas from hospitals, doctors and nurses so desperate for personal protective equipment amid the viral pandemic that they've turned to the public. The DIY masks can be used for staffers who are working in non-clinical areas as well as for patients, saving the limited supply of N95 masks for those who need it most.

“If nurses quit or become too fatigued or even become ill themselves, then we don't have a frontline anymore,” said Wendy Byard of Lapeer, Michigan. She began organizing friends to make masks after learning her daughter, a nurse at a suburban Detroit hospital was told to wear the same mask all day.

Bill Purdue waterproofs basements for a living, but he has spent the past few days in his buddy's Washington, Indiana, auto trim and upholstery shop cutting rectangles of cotton fabric that his friend sews into face masks.

“Whatever it takes to get the job done, that's what I want to do,” said Purdue, 57, whose daughter works at the women's hospital in Evansville, Indiana. He and his friend Mike Rice responded to a Facebook post last week from Deaconess asking the public for help.

At the Missouri Quilt Museum in Hamilton, Missouri, board members asked local hospitals if masks were needed and “they emphatically said yes,” said director Dakota Redford. Soon other health care providers, including ambulance crews and nursing homes, were requesting masks.

“This has been a true grassroots effort that has exploded across the country in the quilting world,” she said.

For most people, the new virus causes only mild or moderate symptoms, such as fever and cough. For some, especially older adults and people with existing health problems, it can cause more severe illness, including pneumonia. The vast majority recover.