Sgt. 1st Class John Taffe might be the oldest person to graduate from basic combat training.

Sgt. 1st Class John Taffe may be 55 years old, but he definitely doesn’t act his age.

That’s because Taffe may possibly be the oldest person to graduate from basic combat training – tackling sit-ups, push-ups and barbed-wire low crawls like any other young soldier in his class.

A resident of Alameda, Taffe graduated from Fort Leonard Wood, Missouri, Thursday after a demanding 2 1/2-month training. He’s a former sailor, having served 14 years with the U.S. Navy before being released from active duty in 1991.

Taffe’s age almost stopped him from enlisting in the Army, but he made the cut-off, getting in 36 hours before his 55th birthday, when a waiver would have been required.

“My son told me, ‘I hope they crush you.’ My daughter was more concerned,” Taffe said of his family’s reaction to his decision to re-enlist. “My plan is to serve until I’m 62.” 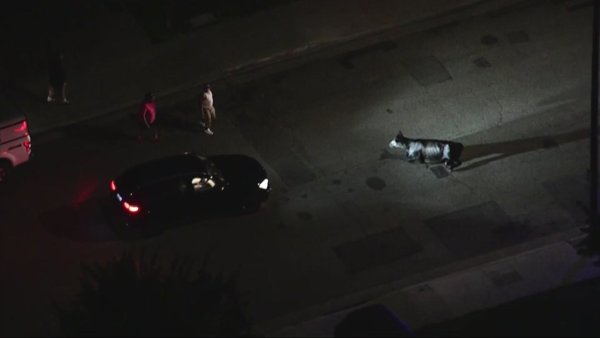 Cows on the Moove: Authorities Chase Down Loose Cows in Pico Rivera “For John to come back at his age, it says a lot about his character,” said Shatara Seymour, chief of public affairs at Fort Leonard Wood.

Taffe is back in the Bay Area Friday, where he will join the Army Reserve and go back to his job as a logistics management specialist for the Department of Homeland Security.

Right after he finished a night crawl while live shots were fired over his head, NBC Bay Area caught up with Taffe to ask him what boot camp felt like at age 55.

When was the exact moment you realized that you wanted to return to the Military?
"After 9/11 I really felt compelled to rejoin the military, but the organization I worked for was not supportive of the idea. It wasn't until almost 14 years later that the opportunity presented itself again while I was exploring other positions within the government. At this time my only choice was the U.S. Army due to my age."

What inspired you to return?
"Serving as a military member is the most unique way to pay it forward for those you love, those you honor, and those who have been lost and couldn't return home. It is the most honorable way for an individual to serve his or her country."

How did your family react?
"A degree of shock at first, but when they saw my commitment and drive to making it a reality, they knew it was the right decision."

How did you prepare yourself?
"I consulted with my doctor, completely changed my diet and eating habits, ramped up my exercise routine, running further and faster almost every day, joined a Cross Fit gym and rode to work every day on my bicycle."

How did others in boot camp react when they saw you training? How do they react now?
"Older people would come up to me and ask my age, and tell me they couldn't/wouldn't dream of doing what I was doing. The younger ones wanted to know if I was human or if I had discovered the fountain of youth. They all say I am an inspiration to them now and that if you get your mind and body right you can achieve anything"

You mentioned culture change and how younger soldiers have a different attitude now. Can you elaborate?
"The military they perceive is like a video game, when in fact it is very far from it. It requires real effort, both physical and mental strength to win in battle. You can't win by how well you can manipulate a game controller."

What is boot camp like?
"Up at 04:00, shave, conduct physical training for about 1.5 hours until breakfast, then it's off to the ranges to conduct live fire training with our weapon. MRE for lunch, continue training until 17-18:00, dinner, back to training after dinner until final formation at 20:30. Then shower, laundry, letter writing and bed by 21:00. Up again for a one hour watch detail between 21:00 - 04:00."

What was the hardest part of your training?
"The physical stuff wasn’t so hard, it was almost too easy. The mental part was hard – just trying to cope with the different things."

Did you feel like quitting at any point?
"At first I did question my thought process that brought me here. I will never accept defeat, I will never quit, just like the lines of the Soldier’s Creed I learned here in the first couple of weeks."

What do you plan to do next?
"Go home to my family and job."