This is CNBC's blog, which covered the SpaceX Inspiration4 launch, a historic crewed launch of nonprofessional astronauts from NASA's Kennedy Space Center in Florida.

KENNEDY SPACE CENTER, Fla. — SpaceX launched its Inspiration4 mission on Wednesday evening from NASA's facility in Florida, successfully bringing its all-civilian crew into orbit. The mission is the first private crew launched to orbit by Elon Musk's company and the first time a crew was made up entirely of nonprofessional astronauts.

A historic spaceflight for Elon Musk's company, the launch comes with a number of milestones:

SpaceX president Gwynne Shotwell in a statement heralded the mission as "paving the way for a future where space is more accessible to all who wish to go."

Vaccine Mandates for Travel Are Legal in the U.S. — and More Are Probably Coming 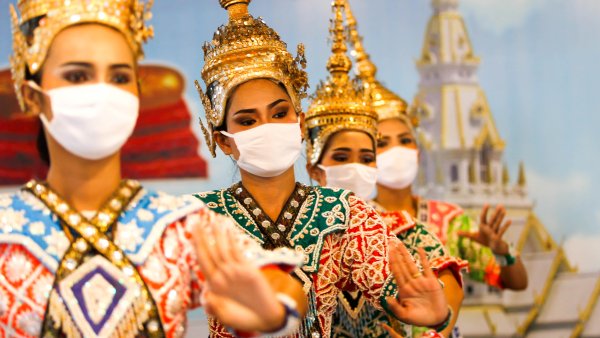 Southeast Asian Economies Will Recover ‘Much Slower' Due to Covid: Asian Development Bank

"We are so proud that they entrusted us to fly them," Shotwell said. "On behalf of all SpaceX employees, I want to thank the crew and their families for allowing us to be a part of their historic mission."

The crew of four — Jared Isaacman, Hayley Arceneaux, Sian Proctor, Chris Sembroski — will spend about three days in orbit before returning, with Crew Dragon capsule "Resilience" planning to splashdown off the coast of Florida.

"Few have come before, and many are about to follow. The door's open now and it's pretty incredible," Inspiration4 commander Jared Isaacman said close to 10 minutes after liftoff, as heard on SpaceX's livestream.

The billionaire entrepreneur and CEO of Shift4 Payments purchased the multiday flight from SpaceX for an undisclosed fee, with the goal of raising awareness and funding for St. Jude Children's Research Hospital.

SpaceX lands the booster of the Falcon 9 rocket

The company landed the Falcon 9 rocket booster on the company's ocean droneship, as the Crew Dragon spacecraft continues on toward orbit. This was the third successful landing for this rocket booster.

Seven minutes after liftoff: Falcon 9 rocket doing well, booster on its way back to attempt landing

SpaceX's Falcon 9 rocket was performing as expected and on course about seven minutes after liftoff. The rocket's booster, also known as its first stage, will attempt to land on the company's droneship station in the ocean.

SpaceX's Falcon 9 rocket rumbles off the launchpad and heads into the Florida night sky, with Crew Dragon Resilience embarking on its second trip to space carrying the history-making crew.

10 minutes to liftoff, SpaceX is go for launch

The rocket is almost fully loaded with fuel and will be ready for liftoff in 10 minutes.

Here is why NASA is supportive of SpaceX's Inspiration4 mission

The Inspiration4 launch represents one example of what can happen when the public and private sectors work together, deputy NASA administrator Pamela Melroy said ahead of liftoff.

"Creating a sustainable economy in low-Earth orbit including commercial transportation to space for people & crew and commercial space stations is critical to our future on Earth & in space," Melroy said on Twitter.

SpaceX developed the Crew Dragon capsule with heavy investment from NASA, which has flown 10 of its professional astronauts on the spacecraft.

The company modified the top of Crew Dragon capsule Resilience to add a massive window for the astronauts, replacing the docking hatch that is under the spacecraft's nose cone with the "cupola."

Here's what the Inspiration4 crew is bringing to orbit

Members of the Inspiration4 crew shared which personal items they are bringing to space in pre-shot segment for the SpaceX livestream.

With 45 minutes until liftoff, the mission director gave the call to begin loading the Falcon 9 rocket with fuel and propellant. The crew access arm then backed away from the capsule in preparation for launch.

SpaceX then armed the escape system on board Crew Dragon Resilience -- this will carry the astronauts away from the rocket very quickly in an emergency scenario.

SpaceX is reusing a Falcon 9 rocket booster to launch Inspiration4, as it previously launched two missions to orbit and then landed. The company will once again attempt to recover the booster using its droneship in the Atlantic Ocean:

The countdown clock has ticked below 1 hour and 30 minutes until liftoff.

Here is the altitude the crew will orbit the Earth at, the highest people have traveled in decades.

The SpaceX team at the launch site closed the hatch to Crew Dragon capsule Resilience, with less than two hours to go until liftoff.

SpaceX completes a check on the spacesuits to make sure there are no leaks, one of the last steps before the hatch of Crew Dragon is closed for launch.

Inspiration4 is counting down to a liftoff time at 8:02:56 ET

All four astronauts seated and strapped into ‘Resilience’

With about two and a half hours to go, all four Inspiration4 astronauts were seated in SpaceX's Crew Dragon spacecraft Resilience. The seats of the spacecraft then rotated back slowly into the launch position, with the astronauts facing skyward.

The four crew members arrived at the top of the launch tower and boarded Crew Dragon, after signing their names on the wall of the crew access arm.

SpaceX added a company logo on the "white room" wall for private astronauts to sign their name, next to the NASA meatball logo that the agency's astronauts sign.

The crew arrives at the LC-39A tower

Back in the Model Xs to go to the launchpad

The crew left the suit up room and got back in the Model Xs for a short ride to the launch tower. SpaceX noted on the webcast that the Model Xs are custom made to work with the space suits and connect to their environmental support to keep the astronauts comfortable.

The crew finishes suiting up

SpaceX principal integration engineer John Insprucker gave a weather forecast update, saying that the local area "looking good for a launch opportunity tonight." Additionally, looking three days ahead to when the crew is scheduled to return and splashdown off the Florida coast, the targeted landing sites are also expected to be clear.

Isaacman, 38, gathered a unique group of individuals for the mission through three ways: from St. Jude's staff, through an entrepreneurial competition, and via a charity lottery.

The Inspiration4 commander founded his payment processing company in 1999 when he was 16. He's also an avid pilot, with a variety of ratings in commercial and military jets. He has flown in more than 100 airshows and is co-founder of Draken International, a private aerospace company that helps train pilots for the U.S. military.

Hayley Arceneaux, a cancer survivor and now a physician assistant at St. Jude, is the mission's medical officer. She survived osteosarcoma, a type of bone cancer, at age 10 and will be the first person to fly in space with a prosthetic body part — as a significant portion of her leg is metal. At 29, Arceneaux will also become the youngest American to fly in space.

Sian Proctor, 51, the Inspiration4 pilot, joined the crew after winning an online business competition through Isaacman's company. She is a geoscientist and science communication specialist, with a passion for space exploration that extends back to her childhood: She was born in Guam while her father worked for a NASA ground station during the Apollo missions. Proctor is an analog astronaut, having completed multiple Earth-based missions that simulate the isolation of living in space. In 2009, Proctor was a finalist for NASA's 2009 astronaut selection

Chris Sembroski, the mission specialist, donated to the St. Jude fundraising campaign and was selected from among nearly 72,000 entries. Sembroski, 42, is a Lockheed Martin engineer and an Air Force veteran who served in Iraq.

SpaceX is debuting a new spacesuit facility for this crewed mission, which is next to the company's Falcon rocket support building next to LC-39A.

For SpaceX's missions with NASA astronauts, those crews had been suiting up at the Neil Armstrong Operations and Checkout facility.

Crew walks out of SpaceX hangar

The four members of the Inspiration4 crew — Jared Isaacman, Hayley Arceneaux, Sian Proctor, Chris Sembroski — walked out of the SpaceX facility that houses the company's reused rocket boosters, before boarding a pair of Tesla Model Xs. They are now driving to where they will put on their spacesuits.

Here is what you should know about Inspiration4

Read CNBC's report on what you should know about the historic Inspiration4 mission.

The organization's website shows $30.8 million has been donated to date, in addition to the $100 million from mission commander Jared Isaacman. The SpaceX livestream also has a donations feature on YouTube, with nearly $10,000 more raised as the webcast began.

The company's livestream of the Inspiration4 launch has begun, with the countdown clock at Kennedy Space Center showing four hours and 15 minutes to go until liftoff.