‘Trial of the Chicago 7' Takes Top Honors at SAG Awards

The starry cast of Aaron Sorkin’s 1960s courtroom drama “The Trial of the Chicago 7” took the top prize Sunday at a virtual Screen Actors Guild Awards where actors of color, for the first time, swept the individual film awards.

The 27th SAG Awards, presented by the Hollywood actors’ guild SAG-Aftra, were a muted affair — and not just because the red carpet-less ceremony was condensed to a pre-recorded, Zoom-heavy, one-hour broadcast on TBS and TNT. The perceived Academy Awards frontrunner — Chloé Zhao’s “Nomadland” — wasn’t nominated for best ensemble, making this year’s postponed SAG Awards less of an Oscar preview than it is most years.

Still, the win for Netflix's “The Trial of the Chicago 7” marked the first time a film from any streaming service won the guild’s ensemble award. Written and directed by Sorkin, “The Trial of the Chicago 7” had been set for theatrical release by Paramount Pictures before the pandemic hit, leading to its sale to Netflix. The streamer is still after its first best-picture win at the Oscars.

Frank Langella, who plays the judge who presided over the 1969 prosecution of activists arrested during the 1968 Democratic National Convention, drew parallels between that era’s unrest and today’s while accepting the award on behalf of the cast.

The 27th Screen Actors Guild Awards are tonight! Entertainment reporter Heather Brooker spoke with some of the “Bridgerton” cast about their nomination for Best Ensemble in a Drama Series and what life is like on set. The SAG Awards air tonight at 6pm PT simultaneously on TNT and TBS.

“‘God give us leaders,’ said the Rev. Martin Luther King before he was shot down in cold blood on this very date in 1968 — a profound injustice,” said Langella, citing events leading up to those dramatized in "The Trial of the Chicago 7. “The Rev. King was right. We need leaders to guide us toward hating each other less.”

The win came over two other Netflix releases — “Ma Rainey’s Black Bottom” and “Da 5 Bloods” — as well as Amazon’s “One Night in Miami” and A24’s “Minari.” Had Lee Isaac Chung’s Korean-American family drama “Minari” won, it would have been the second straight year a film largely not in English won SAG’s top award. Last year, the cast of “Parasite” triumphed, becoming the first cast from a non-English language film to do so.

The SAG Awards are a closely watched Oscar harbinger. Actors make up the largest branch of the Academy of Motion Pictures Arts and Sciences, and SAG winners often line up with Oscar ones. Last year, “Parasite” went on to win best picture at the Academy Awards, and all of the individual SAG winners — Renée Zellweger, Brad Pitt, Laura Dern, Joaquin Phoenix — won at the Oscars, too.

Jamie Chung made a powerful statement with her SAG Awards outfit. The actress explained on Instagram why the accessory and color choice means so much to her as not only a Korean-American but also someone with the opportunity to use their platform to support a timely and important cause.

Of those, Davis' win was the most surprising in a category that has often belonged to Carey Mulligan ("Promising Young Woman") or Frances McDormand ("Nomadland"). It's Davis' fifth individual SAG award.

“Thank you, August, for leaving a legacy for actors of color that we can relish the rest of our lives,” said Davis, referring to playwright August Wilson.

As it has throughout the awards season, best male actor again belonged to Boseman for his final performance. Boseman, who died last August at age 43, had already set a record for most SAG film nominations — four — in a single year. He was also posthumously nominated for his supporting role in “Da 5 Bloods” and shared in the ensemble nominations for both Spike Lee’s film and “Ma Rainey’s Black Bottom.”

It was the SAG Awards where Boseman gave one of his most memorable speeches. At the guild’s 2019 awards, Boseman spoke on behalf of the “Black Panther” cast when the film won the top award. “We all know what it’s like to be told that there is not a place for you to be featured,” Boseman said then. “Yet you are young, gifted and Black.” 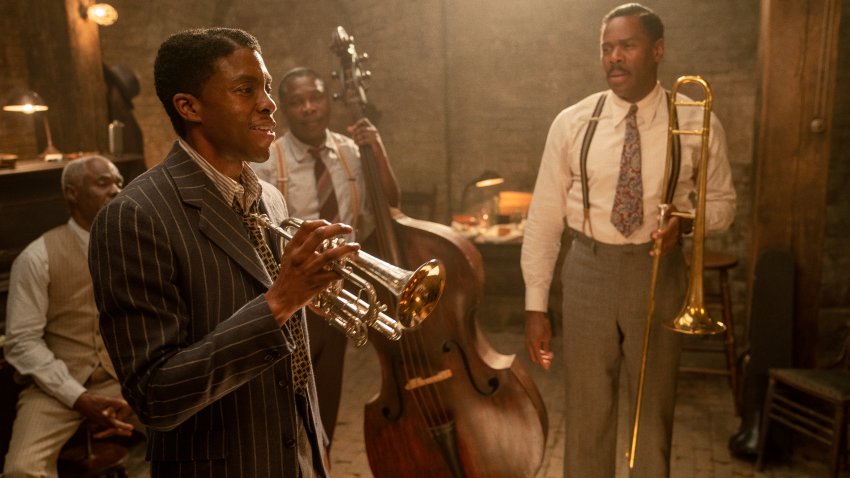 History Was Made During the 2021 SAG Awards Nominations 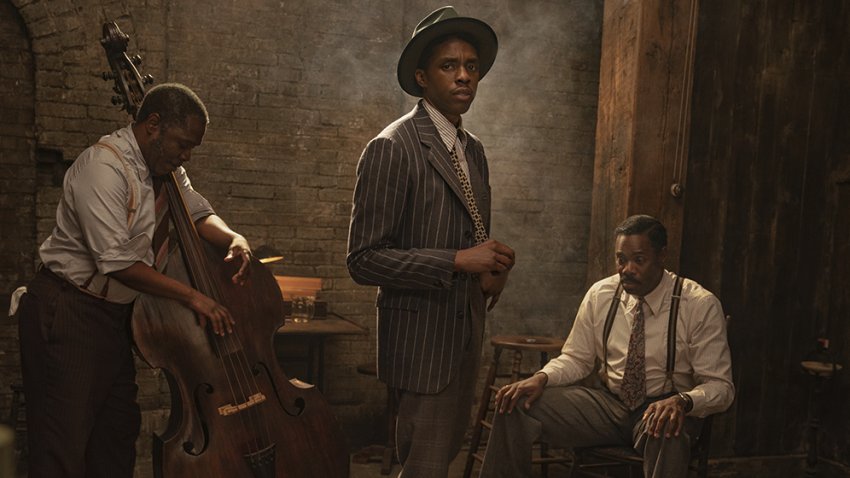 The Academy Awards frontrunner, “Nomadland” missed out on a best-ensemble nomination possibly because its cast is composed of largely non-professional actors. Zhao's film previously won at the highly predictive Producers Guild Awards, as well as at the Golden Globes. “The Trial of the Chicago 7,” up for best picture at the Oscars and four other awards, could pose a challenge to the frontrunner.

In an interview following the pre-taping of the award for “The Trial of the Chicago 7,” Langella called the virtual experience much more civilized. “I’m in my bedroom slippers,” he said from New York’s Hudson Valley. “I have no pants on,” added his co-star Michael Keaton.

Eddie Redmayne, who plays Tom Hayden in the film, credited Sorkin and casting director Francine Maisler for assembling such a disparate group of actors — including Sacha Baron Cohen, Mark Rylance, Yahya Abdul-Mateen II and Jeremy Strong — into an ensemble.

“It was like a clash of different types of music, whether it was jazz or rock or classical -- but all of that coming together under Aaron. He was the conductor, almost,” said Redmayne. “It was a joy day and day out to watch these great and different and varied actors slugging it out.”

Eugene Levy, Catherine O'Hara, Dan Levy and Annie Murphy take turns putting on noise-canceling headphones while Jimmy Fallon asks them questions about each other and challenges them to match each other's answers.

In television categories, the ensembles of “Schitt’s Creek” (for comedy series) and “The Crown" (for drama series) added to their string of awards. Other winners included Anya Taylor-Joy (“The Queen’s Gambit”), Gillian Anderson (“The Crown"), Jason Sudeikis (“Ted Lasso”), Jason Bateman ("Ozark") and Mark Ruffalo (“I Know This Much Is True”).

The awards are typically the highest-profile event for the Screen Actors Guild, though the union’s faceoff earlier this year with former President Donald Trump may have drawn more headlines. After the guild prepared to expel Trump (credits include “The Apprentice,” “Home Alone 2”) for his role in the Capitol riot, Trump resigned from SAG-Aftra.